Joining the Mile High Club Is Actually Easier Than You Think

Turns out some flight attendants are down to hook up, too. 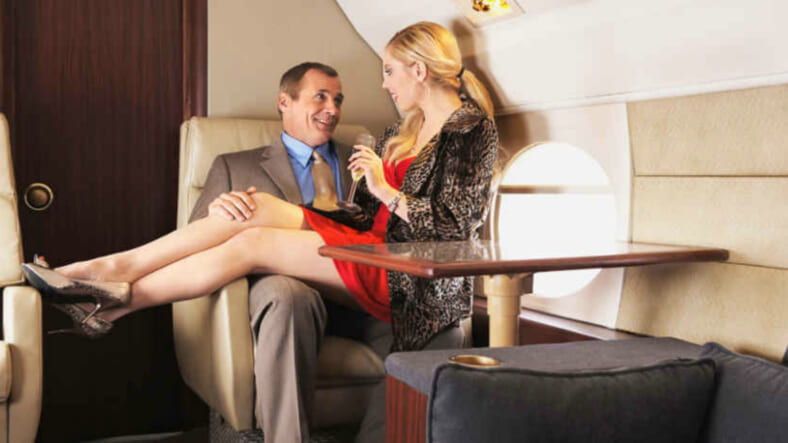 What’s a person to do on a 9-hour transatlantic flight? Well, you could eat 14 bags of shitty airplane peanuts and watch 4 movies, you could read a book, or you could do that thing Leo did in Wolf of Wall Street and get fucked up on Quaaludes and sleep through the entire flight (yeah…don’t do that).

Or you could finally join the mile high club and hook up with the hot lady sitting near you… or with the flight attendant.

You might be thinking, “How the hell am I going to hook up with a rando, let alone with a flight attendant?” Well, my friend, we have some good news for you. Very good news indeed.

According to a new poll by Jetsetter and Travel and Leisure, your chances of joining the mile high club are a whole lot better than you’d expect. And no, it’s not just because of that handy app that helps you find someone to have cramped airplane bathroom-sex with. Though it probably does help.

The poll, which surveyed 1,600 people, found that 15 percent of the respondents admitted to already having a membership to the mile high club. When you think about it, that’s a lot of people, making it apparent that the musky combination of sweat, farts, and reheated ready rice in an airtight cabin really turns people on. So hot.

Additionally, another study by British airfare search engine, Jetcost, surveyed over 700 flight attendants and found that 21 percent of them, meaning around 150 of those flight attendants, have hooked up with a colleague, and 14 percent said they’ve gotten naughty with a passenger.

“Long-haul flights, and relatively empty ones are best,” said one flight attendant in the survey. “A lot of them are overnight, so people have some time to drink, the cabin gets dark, and off you go.”

“Use the handicapped lavatory because it’s larger and there’s more space to maneuver. Plus they have handicap rails so you have something to grip.” Wow, thanks! That’s some good advice coming from a flight attendant

However, it’s wise to be discreet, because “We can get into the bathroom at any point,” another flight attendant said, suggesting the lock on the bathroom door means absolutely nothing.

Anyway, back on the topic of joining the mile high club, there’s one last thing you should know: having sex on an airplane is not going to be as mind-blowing as you might expect.

“Everything is dull at altitude; your sense of taste, smell, everything. If you’re expecting an earth-shattering big bang, it’s not going to happen,” one flight attendant said, kind of ruining everything I once hoped and believed to be true.

But on the other hand, thanks to psychology, we can safely say that the thrill of possibly getting caught, in addition to the novelty of having sex in a completely novel place, is sure to make up for the dulled sensations.