Inside the Bloodiest, Raunchiest Fight Club in New Orleans 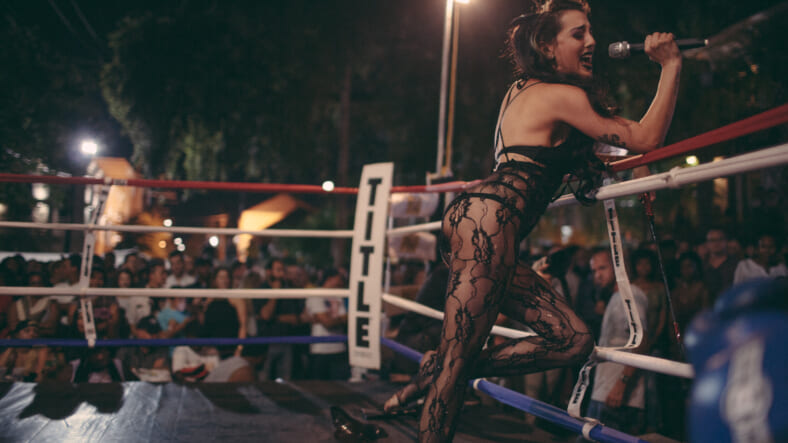 An intoxicated mob forms around a boxing ring in the parking lot outside of Friday Night Fights Gym Headquarters, and Mike Tata couldn’t be happier. The 54-year-old New Orleans resident swigs an Abita longneck and advises two fighters to prepare for their upcoming bout, which will end in minutes with both bloodied and panting, basking in the boisterous applause. Moments later, he chats with a scantily-clad performer named “Charlotte Scarsdale,” who has plans to get even more naked later in the evening while she gyrates her hips against an ominous-looking python.

Tata’s unapologetic approach to entertainment has become the mantra of his Friday Night Fights extravaganzas, and it perfectly explains why the quarterly exercises in fisticuffs and debauchery have become a fixture of the Big Easy party scene.

“When I have 12 fights in my back pocket and eight hot performances that are going to knock your balls off, I’m so confident and know I’m going to kill it,” Tata says.

The brawls between seasoned amateurs on the verge of turning pro and newbies just looking to bust somebody’s face open draw audiences that are as eclectic as the pageantry itself—a sea of Saints jerseys, Armani suits, tattered dive-bar hoodies and Tulane University shirts that regularly engulf the ring.

“You talk to almost anyone in New Orleans and they’ve been to Friday Night Fights,” says 26-year-old bartender Charlotte Bayer, a runner-up in one of Tata’s hot dog challenges. “There’s not just one kind of person who goes.”

Tata didn’t always aspire to be the P.T. Barnum of  pugilism. As a teenager, he needed a kick in the ass from Uncle Sam to get his life in order. “I sold weed all through high school and barely graduated with a 2.0 [GPA],” he says. “I told the local recruiter at the Marine office that I was a fuck-up and that it was time to pay the piper.”

After completing basic training at Camp Pendleton in San Diego, Tata worked as a field artillery operator. His unit never saw battle, but the experience allowed him to see the world. It also inched him toward his future profession. “I used to watch boxing with my dad as a kid, so later I boxed as a hobby in the Marines,” he says. “I wasn’t really good at fighting. I was always better at getting other people to fight.”

In 1995, Tata took a chance and decided to tap into this innate skill when he took his last $60,000 and opened the Blue Velvet Gym in the Chelsea neighborhood of Manhattan. The facility drew world-renowned champions including Evander Holyfield, Lennox Lewis, Prince Naseem Hamed, Shane Mosley and Felix Trinidad.

Nonetheless, rising rents forced Tata to close his doors in 2002 and move his business to New Orleans. Within two years he opened the eponymously-named Freret Street Gym, his first training center, along a dilapidated stretch of commercial businesses a mile away from the French Quarter. Shortly afterwards, he introduced his unique vision of a high-octane boxing bash to one of the biggest party destinations on the planet.

“In New York, I’d be allowed to put a ring in the street, but you couldn’t have alcohol,” he says. “But I had an idea for a show where people could be outside with a drink in their hand. With the exception of a little redneck town deep in the Appalachians, the Big Easy is the only place you can do this.”

Tata understands the recent criticism of boxing. It’s outdated. It isn’t marketed to younger generations. It can be slow-paced. There’s often a lot of boring wait time between bouts. So when Tata launched his first Friday Night Fights card just months after Hurricane Katrina, his plan was simple: Deliver an energetic show that hits revelers with all the punch of an expertly-made Sazerac.

Boxing, of course, remains the big draw of every event. One of the biggest names to graduate from Friday Night Fights is Demond “Body Shot” Brock (11-3-2, 3 KOs), a rising Louisiana lightweight who boxes for former pound-for-pound king Roy Jones Jr.’s Sanctuary Management.

“New Orleans has always been a boxing city,” Brock says. “What Mike’s shows do is provide bloodthirsty fight fans with boxing at all levels. That’s why so many people look forward to these shows.”

New Orleans amateur heavyweight champion Justin Fisher (26-1, 13 KOs) plans to follow in Brock’s professional footsteps. “At the amateur level, no one else is putting on shows like Mike’s,” he explains. “I had a guy come to my last fight and offer me a pro contract. These fights are definitely getting me a lot of attention.”

Meanwhile, former WBC women’s lightweight champion Tiffany Junot trains nervous newcomers who also get opportunities to slug it out in front of Tata’s crowds. In spite of their inexperience, Tata finds these bouts equally compelling. “I match up fighters by ability and don’t care who wins,” he explains. “I just want the bouts to be entertaining as hell.”

Should any fall flat, Tata maintains confidence about regaining momentum. Angie Z, a sultry, 29-year-old burlesque dancer from the French Quarter, treated a jazzed audience to a striptease at one of Tata’s most recent shows while she belted out Rihanna’s “S&M.” Audiences are always riveted by these performances, which include plenty of flesh with props that include whips and snakes.

“I like to give an intimate kind of act that makes each person feel like I’m performing specifically for them,” Z explains. “It creates a nice little break from the carnage.”

The drag queens provide an added edge. “Some people look at my act as crazy because I am a guy dressed as a female,” says Britney Delorean, one of Tata’s regular performers. “People are shocked at how good I look and are like ‘Wow, you’re really a guy? Well, damn!’ I can cause a lot of confusion.”

Sexy dance teams like “The Twerk Towers” test their assets inside the ring, and aspiring rappers spit their best lyrics to energize already-raucous gatherings. At a 2015 show, Tata even challenged a daredevil to jump his bicycle over the ring, like a modern day Evel Knievel. He totally missed and broke his collarbone, but the crowd loved it.

“Other than being a big, drunken party, Friday Night Fights is where you make your bones,” Tata explains. “It’s a platform for fighters and entertainers to move on to bigger and better things. If you can kill it here, then maybe you can kill it anywhere.”

Tata’s recent March 4th boxing card turned out to be a success. It was his 38th event, but the first at his current Friday Night Fights Gym location, set a few blocks from the Superdome. “We had about 1,400 people,” he says. “An okay turnout, considering we’re at a brand new place.”

Tata plans on turning Friday Night Fights into a reality TV show. He’s already filmed a pilot and is searching for a cable network that’s willing to roll the dice. With Tata’s affinity for incorporating attractive females, he’s hoping to add new meaning to the term “boob tube.”

In the meantime, Tata will set his sights on his next show, which is scheduled for June. He’ll work feverishly to bring together the bizarre puzzle pieces that create his unique version of “the sweet science.”

“I incorporate sex, violence and comedy into every show,” he says. “I make boxing fans out of people who never realized they were boxing fans.”