How to Flirt During Jury Duty

See you in court. 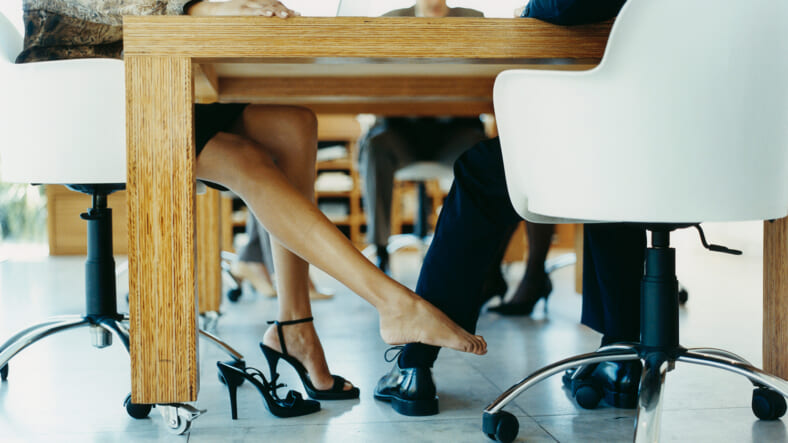 There are two universal truths to civic responsibility in the United States: paying taxes and jury duty. They’re both equally fundamental to the particular facsimile of democracy we’ve built over the past two centuries — and both equally, fundamentally awful.Jury duty can be the worst. It’s not the act of actually serving on a jury that’s so offensive; to actually examine evidence and deliberate as the jury of peers promised by the American legal system is an honor. But it’s the listless floating in the jury pool, the constant waiting for a call or your eventual dismissal, that makes what should be a patriotic pleasure feel like standing in line at the DMV.There’s a way to spice up your civic obligation, though: foisting potentially unwanted attention on women you just met! Remember, you’re there to do your duty, but sometimes opportunity knocks — here’s how not to be a dick when navigating the strange civic mausoleum that is the jury pool:

Keep it to the jurors — and never in the courtroom: Please, for the love of God, don’t sully the American criminal justice system more than you already are and disrupt trial proceedings by waving your dong at a sexy ADA. It’s happened before: a woman sank a trial in Australia in the summer of 2015 by flirting with the defendant in open court. Another one flirted with John Edwards in 2012. Just don’t: they’re on the job.

Answer the question: Once you’ve moved from the jury waiting room to courtroom juror selection, the interrogation begins. But instead of getting the perfunctory questions from a date, it’s from a gaggle of attorneys — and that means you have to get personal in front of a whole gang of strangers. Georgia Dullea described the potential for intrigue in jury selection best in the New York Times back in 1993:

Details of your lives laid bare in open court. You haven’t even met and already the mystery is gone. Perhaps you will get on the same case and learn more about each other. What else is there to talk about but yourselves? Didn’t the judge order you to not discuss the case? Perhaps you will go to lunch and not talk about the case some more. It could happen.

Be very, very quiet: If you’ve come up for jury duty before, you’ll know that jury selection proceedings are an almost entirely silent affair until a jury pool is called into a courtroom. Anything you say or do can and will be heard by everyone around you. Choose your words carefully. Or just don’t talk at all, this is like being inducted into the Basketball Hall of Fame and deserves your full attention.

Share the experience: The biggest obstacle to talking to any stranger, man or woman, is a lack of context. Lazing about in the jury pool is its own, bleak, suffocating context, so leverage it to your advantage. Chatting with your neighbor about the shitty vending machine, a humorous bailiff, your fellow inmates, or the civic horror that has consumed your life is the easiest way to forge a quick bond. When in doubt, you can always turn to My Cousin Vinny. “Gee, I hope I get a trial like in My Cousin Vinny,” you say. “Oh yeah? I love that movie,” she says. “Yeah, it’s apparently so accurate they use it as an example in law schools,” you respond, sipping the shitty courthouse vending machine coffee. Three weeks later, you’re married.OK, maybe that last part won’t get you laid, but you just might get a business card out of it.

@jaredbkeller "Those who have knowledge of me would never associate me with prudence, much less jurisprudence."

This isn’t a deposition: If you’re feeling a bit frisky, this simple rule from Gawker’s Allie Jones for talking to strangers is a fine guideline for your jury jonesing: You get two questions, and two questions only.“When approaching someone you don’t know, start with, Hi, how are you? You can ask one more question after that,” explains Jones. “If, after asking those two questions, the person does not ask you a question, time’s up. Politely excuse yourself.” We approve. Better to move on to something (anything) else and not make a scene in a court of law. Speaking of…

Behave yourself: It’s a court of law, fer chrissakes! If you show respect for anything in your life, make it this. Don’t be bawdy or gregarious or loud of vulgar: respect the sanctity of the court, even if it’s just the waiting room. There’s an upside to this constraint, I suppose: if you’re going to be forced to act like a perfect gentleman once in your life, why not make it now?