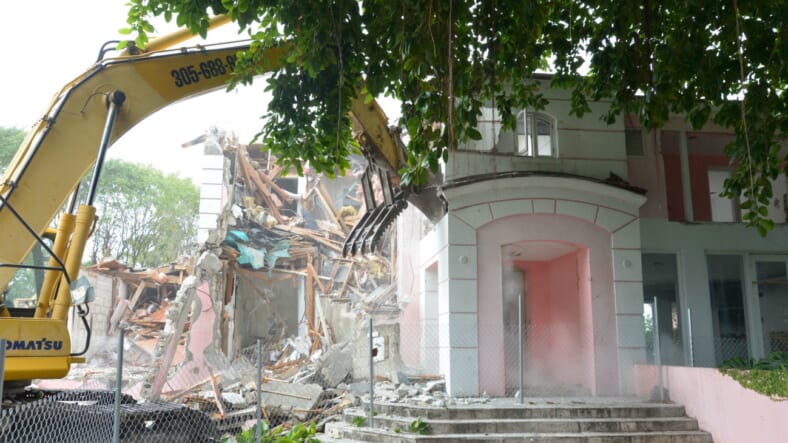 When a Miami fast food mogul bought a rundown pink mansion that once belonged to the late Colombian drug lord Pablo Escobar, he wasn’t only after the house and the ocean-front property—he wanted the spoils hidden inside of it.

That’s why Christian de Berdouare hired a group of treasure hunters to scour the rubble produced during the demolition of the 7,336-square-foot foot home. On Monday, that decision paid off when a safe was found hidden inside of a wall.

“For us, this is the holy grail,” said the home’s owner, who started the chain Chicken Kitchen. “This is real. It’s still locked. It’s very, very heavy,” he added.

The safe was uncovered when the last wall of the home was knocked down. Miguel Mato, who was operating an excavator at the time, saw a piece of rubble smash into the foundation. “It was something gray. I grabbed it with the excavator’s claw, realized it was a safe and started to yell to tell them,” he said.

For now, de Berdouare can only speculate on what’s inside. “I think that it has gold or diamonds,” he said Monday. “Who knows?” He plans to “open it shortly” and find out. In the meantime, he might want to remain sitting on it, as he is in the picture below.

This is the second safe found during the demolition. Another, found bolted to the ground, was stolen when thieves snuck in with a jackhammer under the dark of night.

Escobar “used to hide money in all his houses,” de Berdouare told AFP earlier this month before demolition began. When he was bringing in north of $400 million a month, Escobar was known to stash cash in Colombian fields, abandoned stash houses and behind walls in the homes of his henchmen. He had so much cash hidden in so many precarious places, that 10 percent of his annual take was lost to rats and water damage, his brother once said.

Despite the safes, Escobar never lived in the pink Miami mansion. It was just a gaudy waypoint for giant cocaine shipments and a crash pad for his lackeys. Still, he owned the property until the U.S. government seized it in 1987.

That’s why no one was surprised when, in addition to the safes, de Berdouare’s team found a clear sign of the home’s former role as a drug depot—a mysterious tube of white powder. No, it’s not cocaine. At least, not anymore.

“We gave it to the authorities and it came back negative as cocaine. But we asked the DEA, and they told us that after many years, and because it was behind a stove and essentially cooking, that would happen,” de Berdouare said.

With the house now destroyed and the treasures discovered, de Berdouare plans to build a bigger, better mansion on the site overlooking Biscayne Bay. “This was the biggest criminal in the history of the world. I would like to be associated with something more uplifting,” he told the AP.