The U.S. Is Officially Waging Its First-Ever Cyber War Against ISIS

The newest battlefield is online. 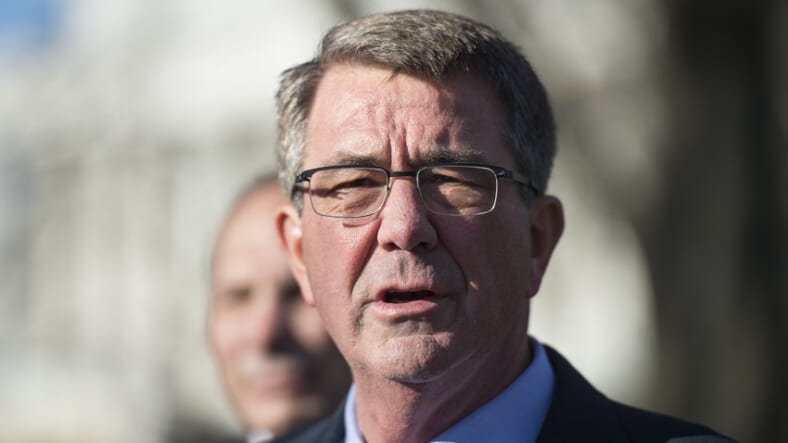 United States Secretary of Defense Ash Carter has indicated the U.S. is taking the gloves off in the fight against ISIS online. Defense One reports that on Tuesday, Carter stated that has”given Cyber Command in the ISIL fight its first wartime assignment.” That assignment, Carter continued, will “leverage their unique capabilities in space and cyber to contribute to the defeat of ISIL beyond terrorism.”

According to Defense One, the Defense Department’s decision to array Cyber Command’s full force against ISIS has everything to do with meeting the enemy where they are:

The calculation has changed largely as a result of ISIS’s own behavior and what the Defense Department perceives as the need to fight ISIS on the group’s own turf, inside online communications networks. He described the thinking as: “Hey, these guys are using this tool. We need to take it away.”Adm. Michael Rogers, commander of Cyber Command, told the Senate Tuesday morning his unit was ready for the upgrade. Appearing before the Senate Armed Services Committee, he discussed the future of the fledgling Cyber Mission Force and defending networks and as part of the so-called Third Offset, the Defense Department’s bid to develop technologies to secure technological advantage. “USCYBERCOM stands ready to help develop and deploy the new cyber capabilities entailed in the Third Offset, particularly hardened command and control networks and autonomous countermeasures to cyber attack,” he said.

Cyber Command is under U.S. Strategic Command and was established in 2010 “for Army missions, actions and functions related to cyberspace, including the responsibility for planning, coordinating, integrating, synchronizing, directing and conducting Army network operations and the defense of all Army networks.” They are the true keyboard cowboys, working to diminish and destroy the enemy’s online capacity and clear the way for U.S. and allied forces communications.

One key feature of ISIS’s rise has been the terrorist state’s effective use of social media both to brand itself and to rope in new jihadis, using sometimes surprisingly artful recruitment techniques. As Cyber Command ramps up to full engagement with ISIS, the Islamic State’s own code warriors will increasingly find their entrances into cyberspace blocked, monitored, destroyed or otherwise unusable.

Carter’s call to intensify cyber warfare against ISIS is just one more way the many forces against the terrorists have the jihadi state on the run. Hopefully defeating the Islamic State online will close off its ability to recruit far-flung actors such as the attackers in San Bernardino or Belgium, as lone wolves inspired by ISIS are a concern for many western governments. Even after the Islamic State is driven from the territories it holds in Iraq and Syria, its sting still could be felt the world over.

With both Anonymous and Cyber Command in the fight, there’s a chance the tides against ISIS will one day turn everywhere they seek to spread their influence.