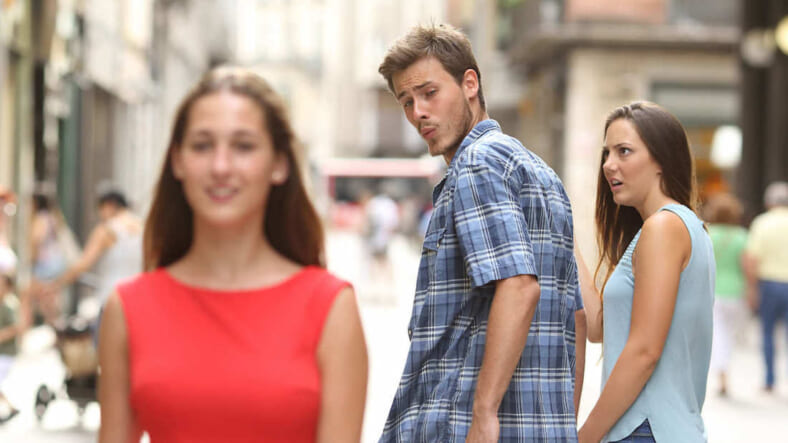 Another viral meme is gripping the Internet and there’s nothing anyone can do to stop it. “Disloyal Man” is a somewhat laughable image of a dude checking out a random hottie walking by as his jealous girlfriend throws him some serious stank face.

It’s an all-too-familiar scenario, played out on countless sitcoms before, that is brilliantly captured without any subtlety in a stock photograph.

Select/All reports this photo comes from Spanish photographer Antonio Guillem, and its real name is “Disloyal Man Walking With His Girlfriend and Looking Amazed at Another Seductive Girl.”

But tweeting millennials are running wild with it, using it as a metaphor for just about anything.

Some clever netizens even tracked down more photos from Guillem’s shoot, and memed them reckless abandon of course.

Some are even using it to meme other memes, like that infamous fall-out between best friends Asif and Mudasir.

“Disloyal Man” (a.k.a. “Distracted Boyfriend”) is so wildly popular, it’s probably got only another legit few days where anyone gives a shit before we’re all sick to death of it.

Enjoy it while it lasts.