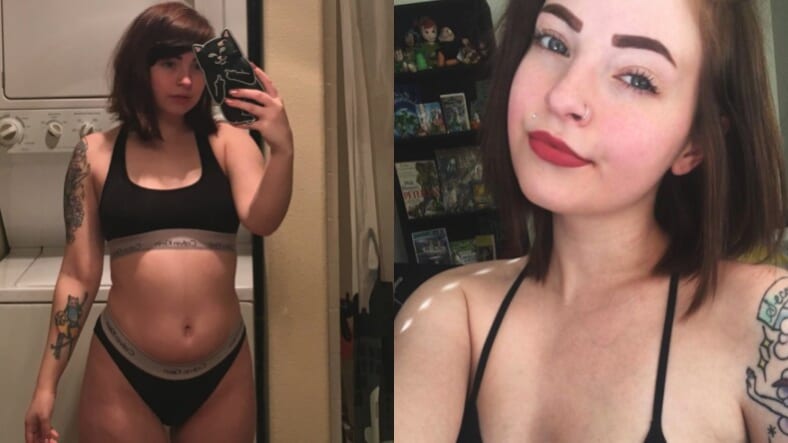 A 23-year-old college student rightfully kicked her verbally abusive boyfriend to the curb after he accused her of gaining a “beer gut.“

Shelby Johnson, a senior at Portland State University, tweeted stills of texts she received from her now-ex in which the dude complained about the way she poses in photos and actually said, “You’re definitely getting a beer gut babe.”

“I am 120 pounds, I have been for about 5 months,” Johnson wrote. “My partner said this to me. Am I overreacting for feeling hurt by this? I’m at a loss and just can’t even comprehend how someone who claims to love me can say this.”

The tweet went viral, garnering thousands of retweets and likes in days. Both her Twitter and and Instagram follower count rocketed from a few hundred to 12,000.

Recent posts show that the woman is anything but overweight.

Johnson also revealed she “worked hard” to reach a healthy size after being medically underweight for years.

Supportive replies poured in as Twitter users called for Johnson to “throw him away.”

Dump him and buy a dog 🙂

After promising to drop a “hefty 180 pounds,” Johnson revealed to her newfound fans that she had ended their relationship.

In the end, the guy was apologetic. But for his now-internet famous ex-girlfriend, it was “too little too late.”

In a statement to Fox News, Johnson said that she hopes her viral moment will empower others to see their bodies in a positive light.

“My goal has been to turn this into a positive thing and empower everyone to feel good about themselves and stand up for themselves,” she said.

“It took me a long time to get where I am with my self esteem and I want every woman out there to know they can get there too! Regardless of the men who say otherwise.”