Would you vote for him? 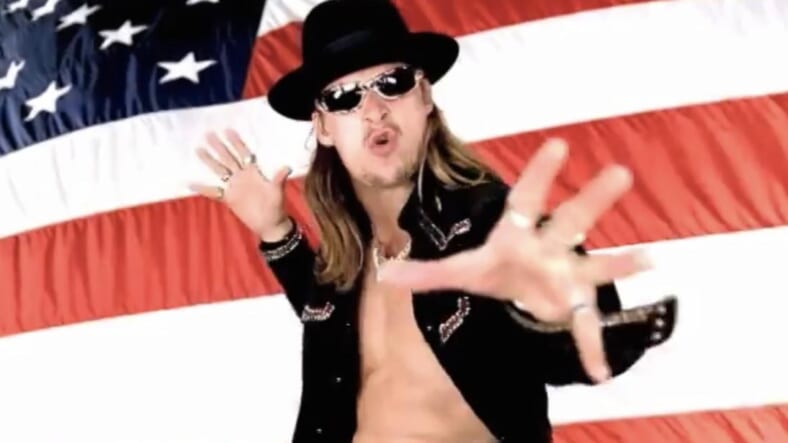 “Michigan musician Robert Ritchie has hinted he’ll shift from music to politics” isn’t nearly as fun to say as “Fuck yes, Kid Rock may be running for senate.” That said, both statements are true.

Rock, who has been making serious noises about doing this since early this year, admitted Wednesday that the website “Kid Rock For Senate” is not a joke. He tweeted that he’d received “a ton of emails and texts asking me if this website is real… http://kidrockforsenate.com The answer is an absolute YES.”

In case anyone thought he was just going along with the joke, Rock then tweeted that he’s got “a major announcement in the near future” and signed the post, perhaps just to clarify he was the one doing the tweeting and not a publicist or assistant.

The Hill reported that Rock’s reps had no comment other than to refer inquiries to his Facebook page, where a recent post basically repeated the rocker’s tweets.

Rock will have tough competition. He’d be facing Democrat Debbie Stabenow, who has held the seat for nearly two decades and frequently beats Republicans by fairly wide margins.

Still, who says this isn’t just a hint at what’s to come? If Rock shifts into politics and acquires a new set of ideologically-motivated fans, even a failed senate run could set him up to one day aim for the White House. Because why the hell not?

As Rock, a staunch supporter of President Donald Trump, would be unlikely to run in 2020, that would leave 2024. And who knows, Dwayne Johnson might be running then as well.

We’d have the United States’ first Rock vs. Rock election, and we can guarantee campaign season would be full of epic explosions and gun-toting babes in red, white, and blue swimsuits.

Regardless of party affiliation, who wouldn’t be down for that? He is, after all, and “American Badass.”