“He’s going to win the nomination if he gets in.” 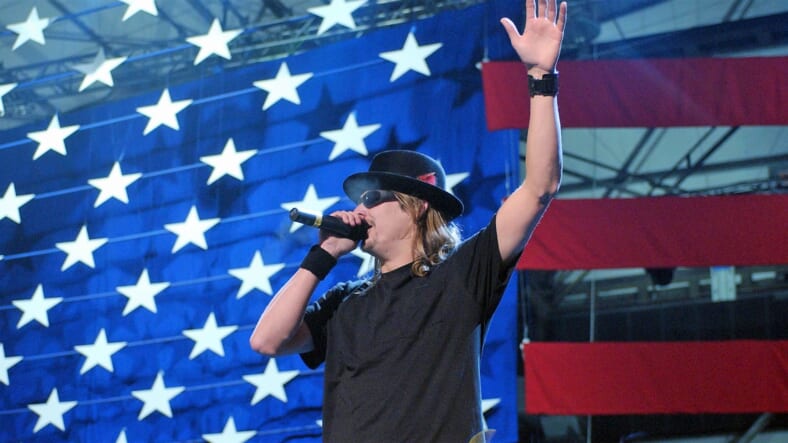 As evidence mounts that Kid Rock is planning to run for a U.S. Senate seat in Michigan, a top political consultant says “there’s no question” Rock will get the GOP nomination so long as he doesn’t commit any truly heinous crimes between now and then.

“Presuming Kid Rock doesn’t get caught in bed with a little boy, or beat up a woman between now and August 2018, he’s going to win the nomination if he gets in,” Dennis Lennox, a Republican consultant from Michigan, told Politico.

“I think there’s no question about that. I think he’s the prohibitive favorite if he gets in,” he added.

If and when he’s nominated by Michigan Republican voters, the rap-rocker turned countrified bad boy also have a real a shot at winning the general election. In fact, Rock—whose real name Robert Ritchie—recently tweeted an article including a Delphi Analytica poll that showed him leading Democratic incumbent Sen. Debbie Stabenow 54 percent to 46 percent.

Rock’s universal name recognition will help him get press much more easily than a traditional candidate, but actually defeating Stabenow will still be one hell of a challenge. Politico has further details:

“Debbie Stabenow is deeply entrenched after cruising to reelection by 15 points in 2006 and 20 points in 2012. She is affable, well-known and relatively popular around the state. She has more than $4 million in her campaign account. She is hands-down the Democratic Party’s best politician in Michigan. Stabenow will be very difficult to beat.”

That said, she’s faced an opponent quite like the Joe Dirt star, and the non-traditional campaign he will surely run is what makes him dangerous.

“The fact that he’s non-traditional is appealing to a lot of people. Obviously it scares others who want someone more predictable,” says Saul Anuzis, former chairman of the Michigan GOP. “But if you’re going to beat an entrenched candidate like Debbie Stabenow in a purple state, you need to do something different.”

With no background in politics, Rock will have put in a lot of leg work to make his Senate run a reality. But if the 2016 presidential election taught us anything, it’s that you can’t dismiss even the most inexperienced of brash celebrity candidates.

“You’ve Never Met a Motherfucker Quite Like Me” has never sounded so relevant.