Customs Snagged a ‘Narco Sub’ Carrying $200 Million in Coke, Then Lost It 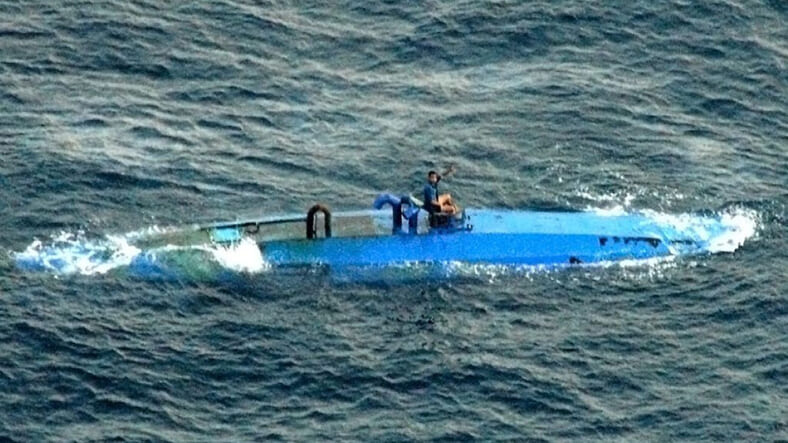 An operation in the Eastern Pacific in early March led U.S. anti-drug patrols to a stunning find: a four-person “narco sub” loaded down with 12,800 lbs of coke, worth a mind-boggling $193,939,000. A U.S. Customs and Border Protection release published March 24 detailed the apprehension of the sub and its crew:

The crew aboard a P-3 Long Range Tracker detected a self-propelled semi-submersible vessel Mar. 2, while conducting counter-narcotics operations with Joint Interagency Task Force (JIATF) South. The task force coordinated an interdiction of the semi-submersible with a U.S. Coast Guard vessel in the area while the AMO crew maintained constant visual surveillance. Upon interdiction, the U.S. Coast Guard arrested four individuals operating the vessel.

No sweat, right? The good guys had the bad guys dead to rights and a mega load of nose candy that would never reach the nation’s crack houses intact.

Then the kicker: “The semi-submersible became unstable and sank.”

Narco subs are rattle-trap affairs at best — made of fiberglass, they have exhaust, an airstack that shoots up from the water like a fat snorkel, and a wheelhouse for the minimal crew. It takes the courage of men and women set to receive a huge coke money payday to run one in rough ocean waters. The huge load interdicted by the US on March 2nd was probably doomed one way or another anyway.

The forces who stopped the sub felt they’d won, regardless. John Wassong, who directs operations from the National Air Security Operations Center in Corpus Christi, TX said the “suspects are arrested and narcotics prevented from reaching U.S. shores” and that “crews will continue to take every opportunity to disrupt this type of transnational criminal activity.”

Reports didn’t indicate whether the cocaine was in a watertight hold when the sub sank. We’re wondering if the same interdiction force is keeping an eye on the waters now for another set of narcos to come along with a better sub and see if they can take over where the arrested crew left off.