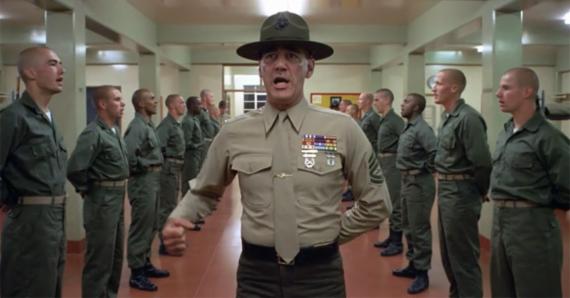 R. Lee Ermey, the Marine Corps drill instructor who transformed maggot recruits into finely tuned instruments of war as Gunnery Sergeant Hartman in Full Metal Jacket, is dead. He was 74.

Ermey’s longtime manager Bill Rogin confirmed that the actor “passed away… from complications of pneumonia” on Facebook and Twitter.

“…It is extremely difficult to truly quantify all of the great things this man has selflessly done for, and on behalf of, our many men and women in uniform,” Rogin wrote.

“He has also contributed many iconic and indelible characters on film that will live on forever. Gunnery Sergeant Hartman of Full Metal Jacket fame was a hard and principled man. The real R. Lee Ermey was a family man, and a kind and gentle soul. He was generous to everyone around him.”

Having been arrested for criminal mischief twice by age 17, he was given a choice of jail time or the military. He chose the Marine Corps. and served as a drill instructor in San Diego in the mid 1960s.He was eventually sent to Vietnam and served 14 months in that country. He was later a staff sergeant in Okinawa, but was medically discharged in 1972 because of injuries [sustained] during his service.

It was while “Gunny” was attending college in the Philippines following his discharge that his experience in the Marines first converged with show business.

Rolling Stone has further details on his early contributions to cinema.

Prior to stepping in front of the camera, Ermey served as a consultant and technical advisor on war-themed films like Apocalypse Now (where he also had a bit part as a helicopter pilot) and The Boys in Company C. He was similarly hired in a consultant capacity for 1987’s Full Metal Jacket, but [Stanley] Kubrick’s difficulty casting the role of Gunnery Sergeant Hartman in his Vietnam epic opened the door for the ex-Marine to audition.

Once he won the now-iconic role, Ermey elected to play it raw.

The performance earned Ermey a Golden Globe nomination for Best Supporting Actor and kick-started a career in entertainment. His 50-plus film and television credits included The Simpsons, The Texas Chainsaw Massacre, Toy Story and Seven.

He also hosted three weapons-centric shows—Mail Call and Lock n’ Load with R. Lee Ermey on the History Channel and most recently, GunnyTime on the Outdoor Channel.

“There is a quote made famous in Full Metal Jacket. It’s actually the Riflemen’s Creed. “This is my rifle. There are many like it, but this one is mine.”

“There are many Gunny’s, but this one was OURS. And, we will honor his memory with hope and kindness. Please support your men and women in uniform. That’s what he wanted most of all.”