Sleeping More Can Make You Better at Sports, Science Says

For the sake of a good workout, go take a nap. 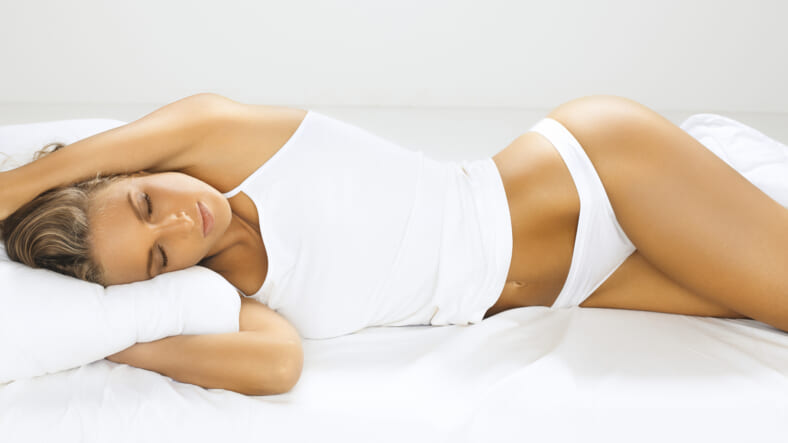 Everyone knows that when you don’t get enough sleep at night, the next day is a doozy. Not only do you feel cranky and foggy, but your body literally can’t function right when you’re running on only a few hours of shuteye. The immune system weakens, brain cells slow down, judgment gets wonky, you’re 12 percent more likely to die early, etc. It’s just not good.

On the other hand, everything is peachy after getting a solid 8 hours, right? Right! It’s no secret that sleeping is one of the greatest things in the world, and with adequate sleep, the body and brain are able to function and regenerate normally, and you feel great.

And now, science just revealed another upside of getting lots of sweet, sweet sleep: It improves your sports performance.

Researchers from Stanford University studied the university men’s varsity basketball team, and found that athletes who slept ten hours each night increased free throw and field goal percentages by nine percent each, and decreased their 282-foot sprint times from 16.2 to 15.5 seconds. In other words, getting enough sleep is key to optimal performance.

According to the National Sleep Foundation, athletes who slept two extra hours per night saw a five percent increase in speed and reaction time, and just one extra hour provides extra energy to perform at a higher intensity, which is always a plus.

Furthermore, the NSF says that “the quality and amount of sleep athletes get is often the key to winning,” and emphasizes that athletes can use up to 10 hours of sleep each night, not only because strenuous physical activity is taxing on the body and depletes energy sources, but also because the body repairs itself when you aren’t awake.

Speaking with Dr. Philip Gehrman, an assistant professor of psychiatry at the University of Pennsylvania, the Huffington Post shared just how restorative different stages of sleep are:

Stage two: Philip Gehrman, Ph.D., assistant professor of psychiatry at the University of Pennsylvania, dubs stage two sleep “average sleep” — it’s not too deep, not too light, and it’s where you spend about half the night. As you move into stage two sleep, you lose a sense of your surroundings and your body temp drops, according to the National Sleep Foundation. Brain waves are slow (with some rapid bursts) and your heart rate and blood pressure slow down and regulate. That means, for much of the night, your heart and vascular system are getting a much-needed rest, which might help to explain the many cardiovascular benefits of shuteye.

Stage three: “This is our deepest sleep,” Gehrman says of stage three (which used to be separated into stages three and four). “It’s also called our slow-wave sleep because our brain waves are these slow, high-amplitude waves.” During this restorative stage of sleep, blood pressure drops, breathing slows down, blood flow moves to the muscles and tissue is repaired, according to the National Sleep Foundation. Hormones, such as the human growth hormone, are secreted at this time as well. Stage three is also where parasomnias, such as sleep walking, talking or eating, take place. Since this is the deepest sleep (and the one that makes you feel well-rested and energetic the next day), it’s also the hardest stage to be woken from, Gehrman says. About 20 percent of the night is spent in deep sleep, and it mostly happens in the first half of the night.

See? This reinforces the fact that lots of sleep is absolutely necessary for keeping your body in tip-top shape, but also brings up the topic of getting enough quality sleep.

To help you get better sleep, here are three recommendations:

Use the military technique to fall asleep in 2 minutes

Developed for soldiers and pilots to ensure they get enough rest for optimal performance and minimal errors, this secret technique has a 96 percent success rate after six weeks of practice. Here’s how to do it, as explained by Joe.co.uk:

One: Relax the muscles in your face, including your tongue, jaw, and the muscles around your eyes.

Two: Drop your shoulders as low as they’ll go. Then relax your upper and lower arm on one side, and then the other.

Three: Breathe out, and relax your chest.

Four: Finally, relax your legs, first thighs and then calves.

So what comes next? Well, after ten seconds more of trying to clear your mind, Lloyd Bud Winter (the book’s author) suggests that you picture one of the following three mental images:

Lying in a canoe on a calm lake, nothing but blue sky above you.

Snuggled in a black velvet hammock in a pitch-black room.

Get an aromatherapy diffuser

Study after study proves that essential oils really do affect physiology, and lavender, chamomile, and cedarwood oils have relaxing and sedating properties, which helps you get to sleep and stay asleep.

Put your phone away

The blue light from your screen has a very short wavelength, which confuses your brain and tricks it into thinking its daytime. This messes with your melatonin levels, and in turn, screws up your circadian rhythm. If you’re not getting good sleep or can’t nod off fast enough, swap your phone for a book at night. Trust.

short-wavelength-enriched,” meaning it has a higher concentration of blue light than natural light—and blue light affects levels of the sleep-inducing hormone melatonin more than any other wavelength.