From mountain to mole hill? 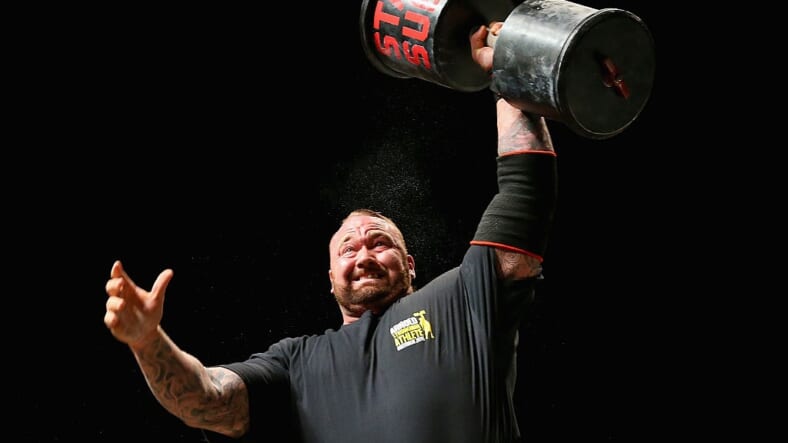 Even true strongmen eventually move on from the sport. Bjornsson recently showed off a 110-lb weight loss (451 lbs to 341) and announced he was retiring from Strongman competitions. Standing 6’9″ Bjornsson is still probably one of the most dangerously mighty humans on the planet, but it seems like the huge Icelandic actor is looking at his health differently. Following in the newly slimmed-down footsteps of rapper and TV chef Action Bronson and actor-turned-fitness influencer Ethan Suplee, The Mountain is taking fitness seriously.

He also likely got damn tired of eating all the time, a requirement for strongman competitors in active training. Bjornsson, as he mentioned in the caption above, did indeed post an 18-minute video detailing his day on Youtube, and even on a diet he’s eating enough for two normal-sized (5’10” – 6’0″) men at every meal. It’s just that he used to eat for five.

Still, even if Bjornsson’s massive breakfast — which includes lots of eggs and what looks like a jug of yogurt — might make another man want to lay down for a nap, he has clearly gained a lot of energy and speed, looking surprisingly light on his feet in the video above.

While Bjornsson’s video and his success are inspiring, it’s easy to forget that his career is absolutely locked up in his fitness and appearance so he is essentially doing his job. Most people can’t do three gym sessions a day or afford nutritionist assistance in meal prep. Also, his size makes it easy to forget that at 32, he’s still a young man.

Unless you’re 7’0″ and 500 lbs, The Mountain probably isn’t a good role model for how to take off weight and gain definition.

However entertaining it might be to watch Bjornsson go through his day (and between his affable personality and appealing family it really is a fun video) when it comes to fitness and weight loss, everyone’s mileage varies.