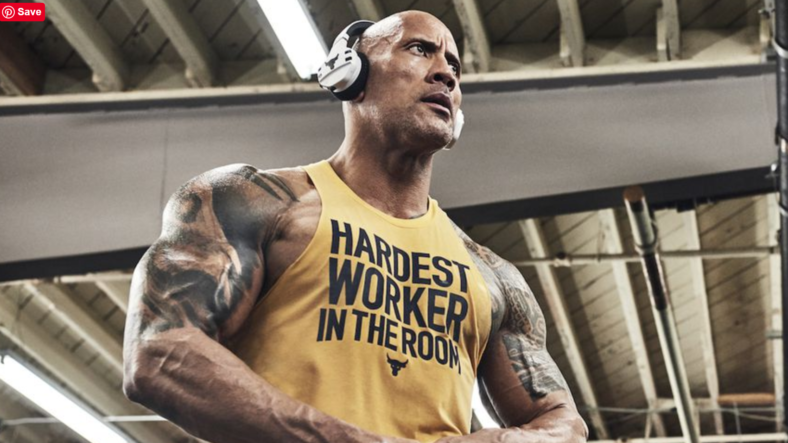 If you know nothing about Dwayne “The Rock” Johnson, you can still look at the world’s biggest action star and make one solid conclusion: Dude knows his way around the gym.

The Rock IS the gym. It’s his Iron Paradise. He recently did a swole-tastic Under Armour/JBL headphones photo shoot in that paradise, and in the process he demonstrated how he stays so jacked. It’s motivation, sure, but it’s also all about technique. And the name of his game here for a grueling chest workout is “drop sets.”

As an internal Maxim editorial discussion revealed, plenty of meatheads and proto-meatheads know what the drop set is and how to use it, but it’s not necessarily standard knowledge for gym newbies striving for those gains.

The Rock demonstrated in mere seconds how it’s done. Men’s Health asked an expert to elaborate so it’s easier to understand what the big man is doing in that video:

“The game plan is simple: You do as many good-form reps as possible, but the moment your mechanics fail, you drop to a weight you can handle to do more reps. You’re challenging the muscle further without inviting the mechanical flaws that could lead to injury.”

For my new IRON WILL COLLECTION campaign and photo shoot, I barred everyone from my gym while I trained. No @underarmour execs, no @sevenbucksprod @sevenbuckscr execs, no make up, grooming, no assistants etc. No one allowed except my three shooters and my strength & conditioning coach @daverienzi. My gym time is scared and it’s a very effective and authentic process for me to keep everyone out so I can focus. Nothing personal, its business. As always THANK YOU for making PROJECT ROCK @underarmour’s #1 seller worldwide. Keep it raw. #projectrock #ironwillcollection

Re-stated: Load up for the max you can handle. Bust out as many reps as you can without pulling or dislocating something, take off a couple of plates, repeat. Dwayne Johnson gets it down to a perfectly manageable pair of plates before he’s roasted.

Drop sets are not the answer for every single exercise. If you want to adopt The Rock’s approach, know that it is best done once you’re pretty well-versed in working out in general, and will not fly for every single body part. Men’s Health expert Samuel says it is “best utilized as a finisher in a workout.”

It’s also worth remembering that even if he came into the game with more gym savvy than most, Johnson still has trainers, consultants, dietitians, and physicians available at any time. He can afford to go a little harder. After all, it’s also a big part of his job.

Still, give the drop sets a try on your next back or chest day and see if the burn is worth the effort.