The golf legend is “responsive and recovering” after rolling a Genesis GV80 SUV. 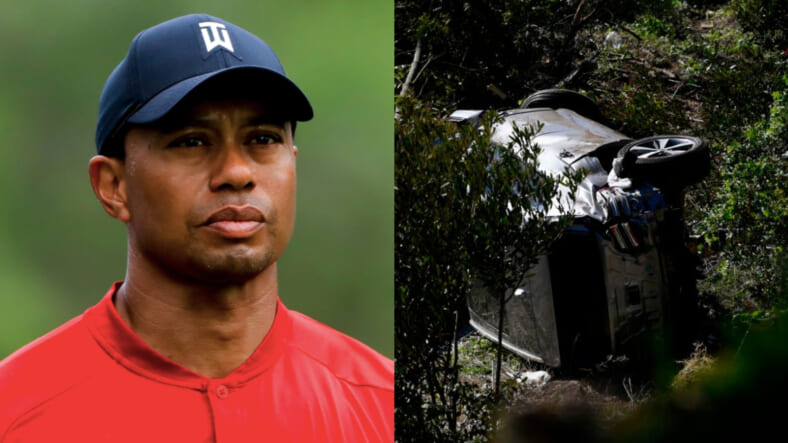 A photo taken of Woods smiling beside the vehicle he later rolled was published on the Genesis Instagram account earlier in the week with the caption, “The man, the myth, the tournament host. #GenesisInvitational #GenesisUSA.”

Here’s more about the wreck from ESPN:

During a news conference on Tuesday, L.A. County Sheriff Alex Villanueva said Woods was traveling northbound on Hawthorne Boulevard at a “relatively greater speed than normal” while descending a steep hill in an area that has a “high frequency of accidents.” He said there were no skid marks in the road and no signs that Woods attempted to brake.According to Villanueva, Woods’ vehicle hit the center divider, destroyed a wooden “Welcome to Rolling Hills Estates” sign and rolled over several times. After crossing the two southbound lanes, the SUV hit a curb and a tree before settling several hundred feet from the road. His vehicle narrowly missed hitting a utility pole.

Reports on the nature of Woods’s injuries have used medical terminology to evade the fact that they were likely gruesome. From the statement above:

“Mr. Woods suffered significant orthopedic injuries to his right lower extremity that were treated during emergency surgery by Orthopaedic trauma specialists at Harbor-UCLA Medical Center, a level 1 trauma center. Comminuted open fractures affecting both the upper and lower portions of the tibia and fibula bones were stabilized by inserting a rod into the tibia. Additional injuries to the bones of the foot and ankle were stabilized with a combination of screws and pins. Trauma to the muscle and soft-tissue of the leg required surgical release of the covering of the muscle to relieve pressure due to swelling.” – Anish Majajan, MD, Chief Medical Officer & Interim CEO at Harbor-UCLA Medical Center.He is currently awake, responsive, and recovering in his hospital room. Thank you to the wonderful doctors and hospital staff at Harbor UCLA Medical Center, the Los Angeles County Sheriff’s Department, and the Fire Department. Your support and assistance has been outstanding.

ESPN’s comprehensive report on the crash relied in part on the account of first responder L.A. County Sheriff’s Deputy Carlos Gonzalez, who said that Tiger Woods “was able to speak to me lucidly” and “incredibly calm,” likely due to shock.

Multiple airbags deploying inside the Genesis SUV prevented even worse injuries. Deputy Gonzalez told the press that “it’s very fortunate that Mr. Woods was able to come out of this alive.”

What isn’t clear at the moment is how this will affect Woods’s golfing career—if an injury of such magnitude might spell the end of one of the most remarkable athletes of the last 50 years.

Strangely, there is precedent in the pro golf world for a champion being gravely injured in an auto accident then coming back to dominate the game—in 1949 golf pro Ben Hogan, still considered one of the all-time greats, was at a career high when he and his wife had a major car accident that put him in the hospital for months. He went on to completely dominate the game for years.

There are still many unanswered questions regarding Woods’s crash, and the New York Post reported that fans worried over a “bloated” and “zoned-out” Woods during an interview he gave over the weekend in which he answered questions about recent back surgery—clearly hinting at concerns he might be overmedicated or even self-medicating.

Whatever happens, the golf phenom has a long road ahead before anyone really knows if we’ll see him play again, but reports all indicate he is responding and alert to his condition and surroundings, so Tiger Woods will get to tell his side of the story one day.