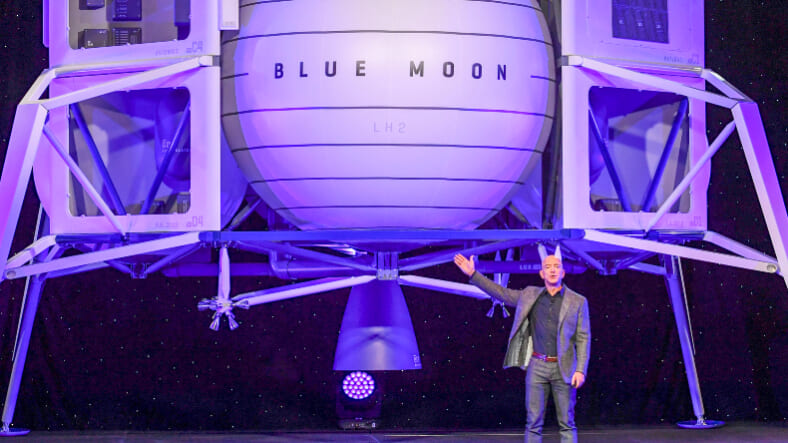 The launch was an unqualified success.

The four passengers were housed inside New Shepard (named after pioneering astronaut Alan Shepard) and they blasted off at 8:30 CT from a site in Van Horn, Texas. The capsule crossed the “Kármán Line” — about 62 miles above the surface of the Earth — where the air in the atmosphere becomes too thin to support a vehicle and the pull of space takes over.

The crew spent about 11 minutes aloft before returning to Earth with no apparent problems at all.

Congratulations to all of Team Blue past and present on reaching this historic moment in spaceflight history. This first astronaut crew wrote themselves into the history books of space, opening the door through which many after will pass. #GradatimFerociter #NSFirstHumanFlight

As they passed into space, Wally Funk was heard on capsule audio exclaiming, “It’s dark up here,” and another passenger said they were “a very happy crew,” according to CNN.

Funk was an original member, in 1961, of NASA’s volunteer “Women in Space” program. She never got the chance to go. Her wild ride with the Bezos brothers made her a record-holder, though — she beat out no less than one of the original astronauts, John Glenn, to become the oldest person to ever make such a flight. Glenn was 77 when he last went to space in 1998.

At 18, Funk’s fellow passenger Oliver Daemen also set a record, becoming the youngest person to ever make such a flight.

Prior to the launch, Jeff and Mark Bezos delivered food to the assembled media. Hearing someone ask if it was his “last meal,” the world’s wealthiest man said, “Did somebody say last meal?”

Laughing, Bezos continued, “I don’t think you have to put it that way! Let’s talk about it in a different way!”

Only 4% of the world recognizes a lower limit of 80 km or 50 miles as the beginning of space. New Shepard flies above both boundaries. One of the many benefits of flying with Blue Origin. pic.twitter.com/4EAzMfCmYT

While Bezos’ fellow billionaire Richard Branson was the first of the ultra-wealthy entrepreneurs aiming to commercialize space to actually go for it personally on July 11, 2021, Bezos’s New Shepard soared higher, as Virgin Galactic’s SpaceShipTwo topped out at about 50 miles up — something Blue Origin took pains to note in the series of tweets above.

Elon Musk can make a legit claim to having beaten his most high-profile competition overall, as his SpaceX was ferrying humans into the wild blue yonder in May 2020. However Musk wasn’t inside the spacecraft himself, so he’ll end up the third billionaire to personally take that ride whenever he finally joins one of his SpaceX crews on the launchpad.

After landing Bezos — who has indicated watching the 1969 Moon landing as a child was his original inspiration — summed up the experience in three simple words: “Best day ever.”