Watch This Woman Wiggle Out of Handcuffs, Steal a Police Car, and Lead Cops on a Totally Insane High-Speed Chase

This was a VERY bad idea. 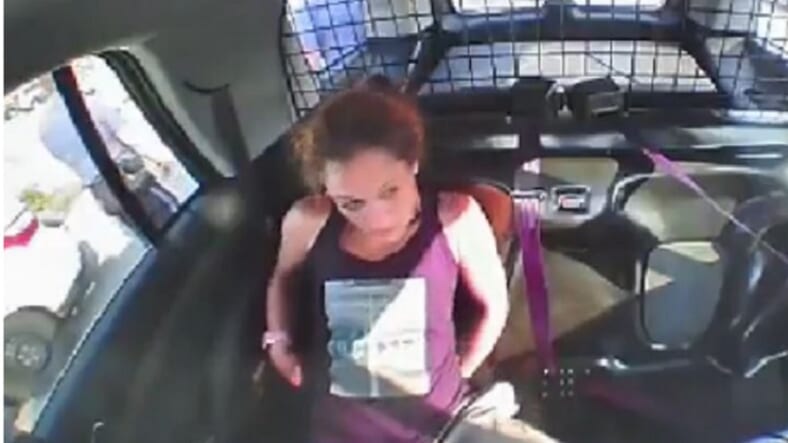 Law and order are serious business in Texas. Police don’t play around in the Lone Star state. And it’s obvious in the video above (which has, of course, gone viral) that suspect Toscha Sponsler didn’t give a damn, she wasn’t ready to go to jail that day.

In a Facebook post the Lufkin, Texas police gave the back story on the exciting and kind of bananas video above. They’d approached Sponsler, age 33, as a shoplifting suspect.

She wasn’t feeling that and ran, making police chase her on foot. After she was caught and put in custody, took her back to the store where she’d been accused.

Left alone in the rear of the police vehicle, Sponsler can be seen on the video partially slipping out of her cuffs, sliding into the vehicle’s driver’s seat and hauling ass out of there.

Lufkin police ended up chasing Sponsler at speeds up to 100 mph. During the pursuit—which included at least three near head-on collisions—police said they could see Sponsler attempting to unlock the shotgun in the cruiser’s cab.

As evident in the video, the police weren’t taking any chances with Sponsler once they managed to knock her off the road and arrest her again.

Sponsler has been jailed with an $18,000 bond and police say she faces “escape causing serious bodily injury/threat of a deadly weapon, aggravated assault against a public servant, possession of a controlled substance, evading arrest with a vehicle with a previous conviction and unauthorized use of a vehicle.”

Probably would’ve been a better choice to just take the shoplifting charge.