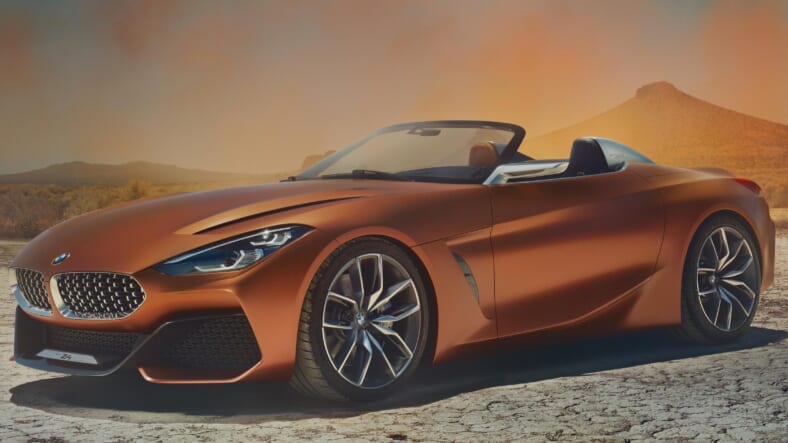 BMW revealed the stunning new design of its Z4 roadster today at Monterey Car Week, previewing the sleek lines of the replacement for BMW’s oldest current model, which dates back to 2009.

The new Z4 Concept is notably lower in the front, with a steeply sloped hood. That hood is also shorter than the old car’s with the cockpit moved forward to the center of the car rather than placing occupants virtually atop the rear axle, as the current car does.

Prominent air extractor vents behind the front wheels serve as the leading edge of crisp scallops in the concept car’s sides.

“Stripping the car back to the bare essentials allows the driver to experience all the ingredients of motoring pleasure with supreme directness,” states Adrian van Hooydonk, senior vice president of BMW Group Design. “This is total freedom on four wheels.”

Strongly flared rear fenders combine with the horizontal taillights to lend the Z4 Concept a wide and low rear stance.

While we’ve seen a resurgence of color in car interiors lately, BMW is doubling down on the stark black look in the Z4 Concept, surrounding the driver’s position in all black to stand out from the orange passenger’s side trim and exterior paint.

There are no technical details available yet, but you can expect them with the production car’s official announcement at next month’s Frankfurt Motor Show.