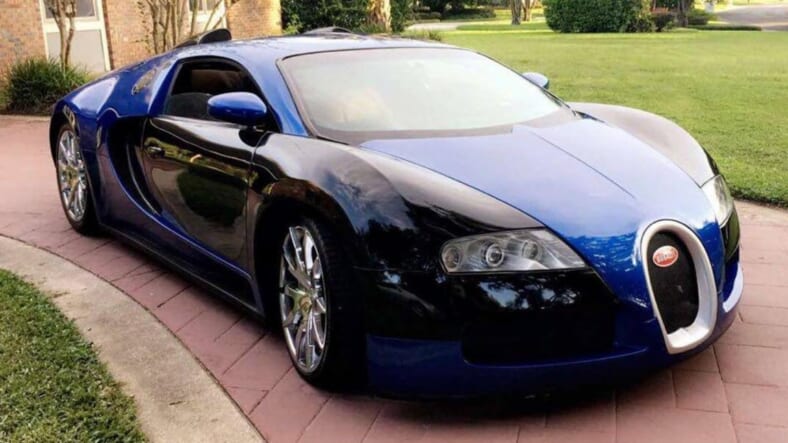 The phrase “budget Bugatti” sounds like some sort of oxymoron, but there is a Florida man selling a Veyron for the low, low price of $125,000.

Except it’s not really a Veyron. What you’re looking at is a 2002 Mercury Cougar that’s been modified extensively to look like the $2.5 million French hypercar.

This “Cougatti,” as it’s been cleverly deemed by automotive writers, isn’t running a howling 1,200-horsepower W16, but the Cougar’s very sad stock engine: a 170-horsepower V6. That’s about an 85 percent decrease in power.

And since the rest of the guts also come from the defunct American coupe, the Cougatti definitely won’t handle anything like a Veyron. What it’s got going for it is a pretty damn good imitation of the its shell, including the headlights, grilles and bodywork. As Car and Driver notes, the only dead giveaways at a glance are the goofy rims and lack of carbon fiber.

The interior isn’t quite as an impressive. While the seats, dashboard and instrument cluster are customized to look like the real thing, the steering wheel, switchgear and shifter are totally off.

Even so, If you want to take the Cougatti off the anonymous sellers’ hands, check out its listings on Craigslist Orlando or Car Export America, where they have rightfully listed it as a Bugatti Veyron replica.