The bike brand formerly known as Confederate is making a new model with 120 peak horsepower and an aircraft-inspired design. 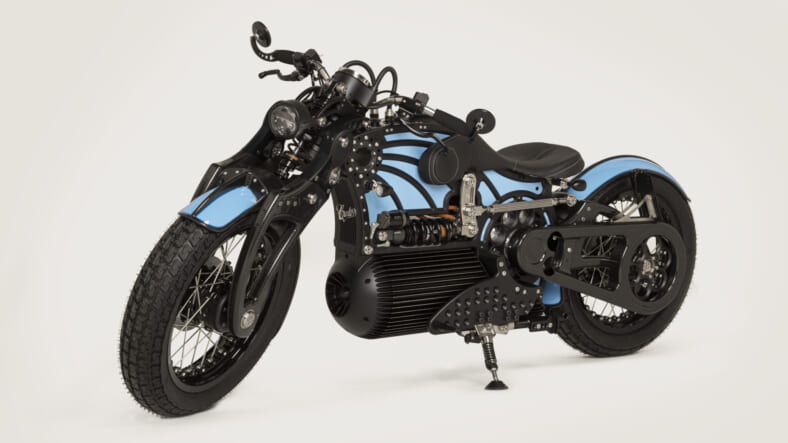 Curtiss Motorcycle Co., formerly known as Confederate, has boldly stated “beauty is not the outcome, it is the goal” with regard to its new commemorative model dubbed “The One.” It is not only beautiful, but extremely accessible, plenty powerful and admittedly, very expensive.

The steampunk-style all-electric cruiser celebrates the pre-WWI accomplishments of Glenn H. Curtiss—the engineer and aviator for which the Alabama-based moto manufacturer was named under the rebrand—including the setting of the land-speed record on a V8-powered motorcycle. The One’s aircraft-inspired TLP monocoque was constructed within the Golden Ratio devised by the Greeks to quantify beauty.

Like the pistol-inspired Hades and Hades 1 Pure, The One’s perfectly symmetrical proportions allow for significant ergonomic improvements—a reduction in girth compared to other motorcycles allows for dirt bike-like ground clearance, a lower center of gravity, a razor-thin width, and a 425-pound weight (whether that’s dry or wet is unknown.

Accompanying those gorgeous looks is an equally intriguing all-electric powerplant. A proprietary axial motor is centered along the horizontal and vertical axis of the chassis, with a hefty hardened-steel drive shaft attached.

Unlike almost any other motorcycle manufacturer, Curtiss doesn’t just provide the arbitrary peak output of 120 horsepower and 147 pound-feet of the torque, but also cites a steady 87-hp and 120 pound-feet of torque across the rev range. No speeds or acceleration times were listed, but combo of low weight and instant power delivery means The One is obviously going to be fast.

There is no gearbox, as power passes directly from the motor to the rear wheel via a toothed belt drive. The bulkheads, backbone, and fuselage skins are digitally milled from a solid block, and the carbon fiber suspension with aluminum girders and RaceTech monoshocks is adjustable.

The Curtiss One is available to build and reserve now from $81,000, making it one of the most expensive bikes on the market—custom or factory.