This Foldable E-Bike Was Created by a Former McLaren Designer 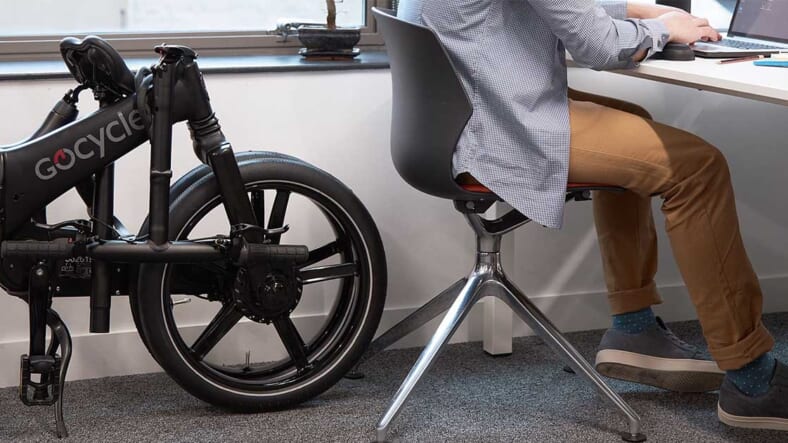 There are plenty of two-wheeled EVs out there, from the ultra-sleek—and insanely expensive—Novus electric motorcycle to the recently unveiled Harley-Davidson mountain bike concept.

What separates the new Gocycle GX from competitors is that it’s extremely compact, relatively affordable, and available for purchase right now.

The forward-thinking electric bicycle is the brainchild of Gocycle founder Richard Thorpe, a former McLaren employee who designed race car components for the British supercar company before setting out to create “the perfect e-bike.“

With a weight of just 36 pounds, the hyrdroformed aluminum frame and handle bars can be folded up to shrink the GX to roughly a quarter of its full size, at which point it can be wheeled through an office hallway or into a subway car and then stored under a desk or in a closet.

See the transformation in action below:

Its specs make it an ideal choice for urban commuters: range is up to 40 miles, top speed is 20 mph, and charge time is 7 hours.

Other features include a three-speed twist shifter, ergonomic Shimano Nexus gears, all-weather tires, and a central LED that displays power levels. All cables and the lithium-ion battery are also totally hidden, giving the GX a streamlined look.

If you want to really geek out, you can even pair the GX to a smartphone via Bluetooth and monitor distance traveled, average speed, calories burned and other metrics using the GocycleConnect app.

Available in Electric Blue, Matt Black, or White with a Black Cleandrive, the Gocycle GX retails on the company’s website for $3,300.