Watch a Tesla Totally Own a Ferrari, Porsche, Lambo and Other Supercars in ‘World’s Greatest Drag Race’ 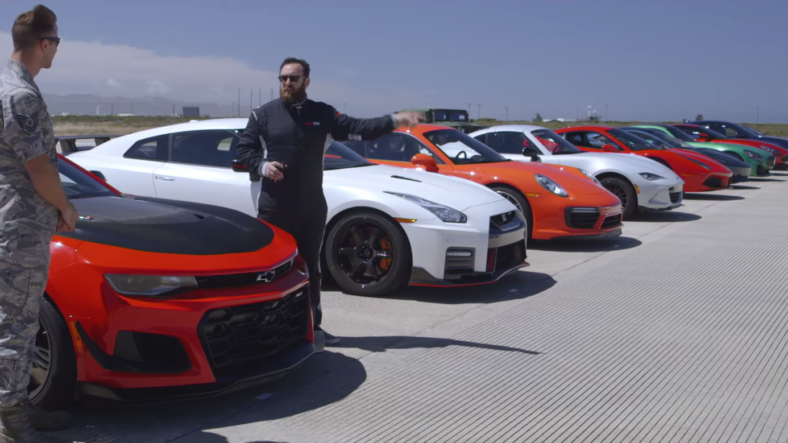 The gearheads at Motor Trend magazine reckon the best way to suss out the quickest car in the world is to line up a dozen likely candidates twelve abreast and let ’em rip at the same time.

MT gathered the combatants on the giant 15,000 ft.-long by 200 feet-wide space shuttle landing strip at Vandenberg Air Force Base in California, which provided ample ample space to run the cars simultaneously.

When the tire smoke dissipated, the Tesla stood atop the heap, blasting through the quarter-mile in just 10.5 seconds at a speed of 125 mph. Yep, that’s the bland-looking white sedan in the center of the pack that leaps off the line ahead of the rest and holds that lead to the finish line.

In a longer race, the gas-powered machines would eventually power past the Tesla, courtesy of their higher top speeds, which vastly exceed its 155 mph limit.

How does Tesla’s green machine keep beating fire-breathing exotics in drag races? It is basic science. Vehicle acceleration depends primarily on torque and traction. Electric motors make their maximum torque from 0 rpm, while gas engines have to rev.

Revving the gas engine either takes time, or the driver can launch at high revs, which will cause the tires to spin, breaking traction and costing time.

Electric vehicles launch with no wheelspin. And an all-wheel drive vehicle like the Model S can put down twice as much power by using all four tires’ contact patches. The result is launches that feel like they are powered by a nuclear carrier’s steam catapult.

The gas-powered cars car are still faster by other measures and they are more fun too, thanks to all the sound and fury that accompanies their operation.

Notably absent were the Dodge Hellcat, Dodge Demon, McLaren 720S and Ford GT, all of which might have upset the electric wonder. Maybe they’ll run in World’s Greatest Drag Race 8 next year.