The Lamborghini Go-Kart Is Here, And It’s Actually Affordable 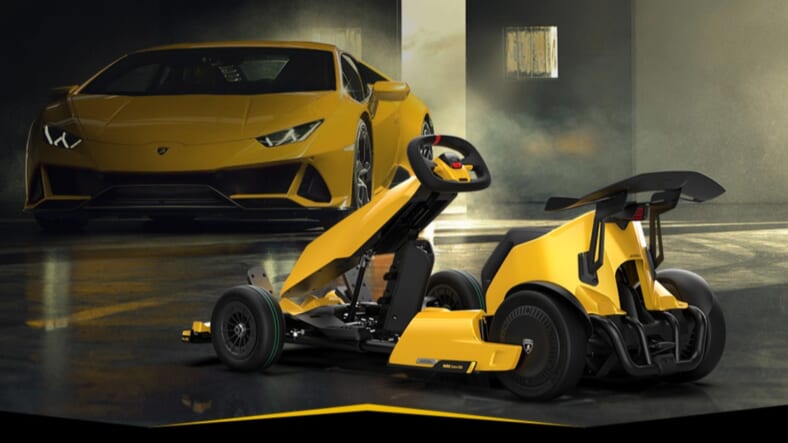 If the words “Lamborghini Go-Kart” ignite a special feeling deep inside your being, prepare for some good news: Segway Ninebot has partnered with the hallowed Italian marque for the Ninebot GoKart Pro Lamborghini Edition, and this baby Bull is actually affordable.

The Lamborghini-ized version of Segway’s Ninebot kart is painted in the automaker’s signature Giallo Orion yellow and tricked out with the Raging Bull logo, traditional Lamborghini lettering and graphics, and a supercar-style rear wing. The open-wheeled stunner also boasts ice blue LED headlights for night visibility, tires designed for drifting, and an “audio emulation system” to approximate the sound of a snarling engine.

The luxe go-kart won’t be ruthlessly churning horses like the power-mad Sian Roadster or a musclebound Lamborghini speedboat, but priced at about $1,500, it’s an absolute steal in the rarefied world of Lambo collaborations. By way of comparison, Swiss watchmaker Roger Dubuis’ skeleton dial Lamborghini timepiece line starts at around $47,000, with one collector reportedly buying a one-off version of the watch collab for a cool $1 million.

While this little Lambo’s specs may be puny by supercar standards, they’re still pretty killer for a go-kart. Its 432 Wh/kg battery powers an air-cooled, rear-mounted electric motor with 15 miles of range, 1.02 gs of acceleration force and a top speed of 25 MPH.

The 40:60 weight distribution is meant to mimic a supercar’s mid-engine handling, and its rear wheel torque can be tweaked via smartphone app to adjust its handling to different driving conditions or whether there is an adult or kid behind the wheel.

The Ninebot GoKart Pro Lamborghini Edition goes on sale at distributor Xiaomi’s online store beginning August 25th initially in China, but devoted Lambo-philes can expect a wider global release in the near future.