This Crazy Electric Mercedes Is the Delivery Van of the Future

Now we just have to update the UPS guy’s outfit. 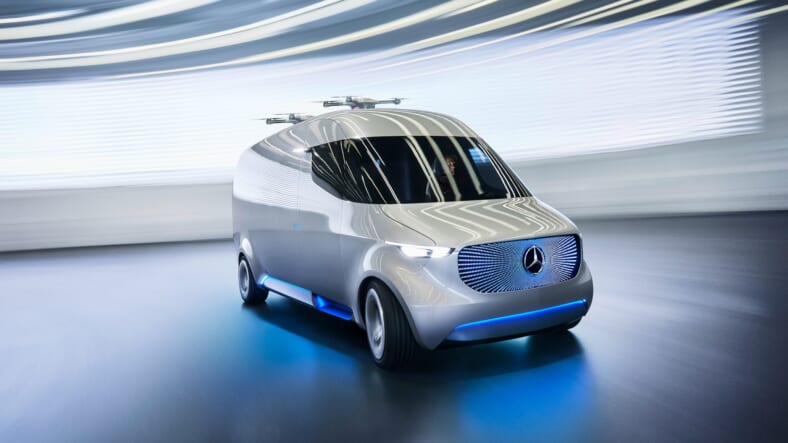 Mercedes-Benz is best-known for its prestigious luxury sedans, but the company also makes trucks, buses and vans. Now, it wants to to be the manufacturer of choice for urban parcel delivery services. This Vision Van concept points to the future with its all-electric drivetrain, automatic parcel sorting cargo bay and rooftop delivery drones that take shipments directly to the recipient.

This 100-horsepower electric van has a driving range between 50 and 170 miles, with its efficiency as a delivery vehicle enhanced by its ability to use a pair of rooftop drones to carry multiple parcels to their final destination so the van can remain stationary.

The electric drive system is not only efficient, but also quiet, especially compared to the diesel engines typically used in commercial vans. “This means that it can be operated in cities even during times when there are traffic restrictions or for late-night deliveries in residential areas,” said Volker Mornhinweg, head of Mercedes-Benz Vans. “This gives our customers the possibility of offering new services to their customers.”

The van might be silent, but no one wants to hear the annoying buzz of drone rotors either, so maybe that’s an area Mercedes can also address as part of its $560 million investment in digitalization, automation and robotics for vans in the next five years.

The best part of this is that when Apple has new iPhone introductions, Mercedes’ Vision Van will get you your new phone as quickly as possible and will do it in a style that is appropriate for your sleek new tech toy.