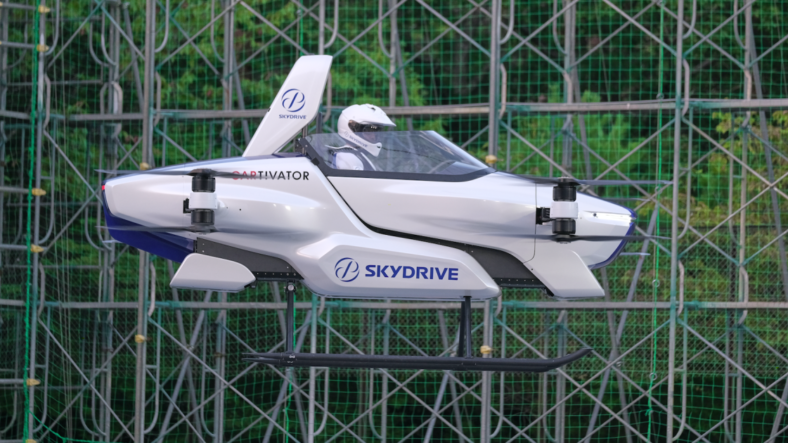 Flying cars are beginning to look a little like the zippy airborne rides science fiction once promised. Japan’s SkyDrive has successfully tested a single-passenger Electric Vertical Takeoff and Landing (eVTOL) vehicle that realistically brings a future of everyday flying transportation for commuters into view.

The Associated Press reported SkyDrive’s modest success on August 28th, publishing the video below and describing it as “a contraption that looked like a slick motorcycle with propellers” that “lifted several feet (1-2 meters) off the ground, and hovered in a netted area for four minutes.”

The AP quoted Tomohiro Fukuzawa—head of the SkyDrive initiative—who said that of “the world’s more than 100 flying car projects, only a handful has succeeded with a person on board.”

“I hope many people will want to ride it and feel safe,” said Fukuzawa.

According to the AP, SkyDrive’s vehicle currently has a relatively useless five to ten minute flying time. However, Fukuzawa indicated the company is looking to bump that up to 30 minutes, making it a potentially much more useful and practical export.

The comparison to science fiction visions of the future is not unrealistic to Japan’s government, which the AP describes as “bullish on [The Jetsons] vision” of a future in which flying cars zip through the skies as easily as grounded vehicles zip down interstates today.

With that enthusiasm helping them finance development, SkyDrive reportedly is planning to launch “business services” as soon as 2023, eventually expanding to regular commercial use by the 2030s.

SkyDrive isn’t the only company with skin in this game. Competitors include Lilium in the EU, California-based Joby Aviation, and a joint venture between Boeing and the Kitty Hawk Corp.

The closest parallel to the rise of the flying car, according to many in the industry, is the early aircraft industry, which began with the Wright Brothers’ first successful flight in 1903 and had expanded to regular passenger flights and “international” airports by the end of the 1920s.

Given the pace of technology development today, however, there could very well be SkyDrive products parked in garages around the world well before the 2040s.