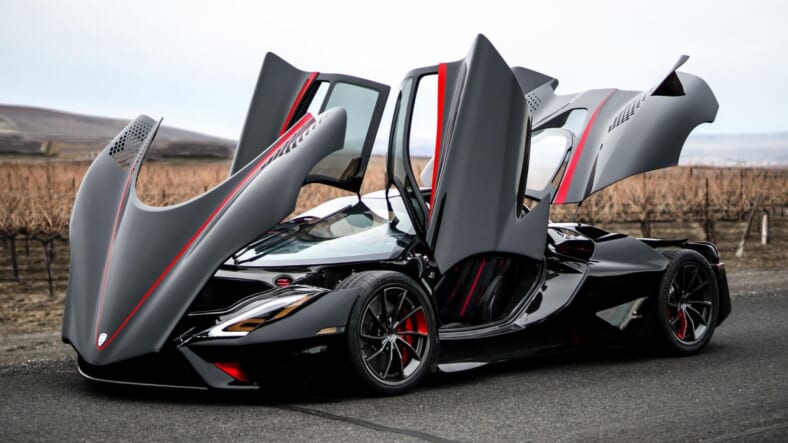 “The resulting aerodynamics package sets the Tuatara apart from our competitors,” said Jason Castriota, who previously worked on the Ferrari 599 GTB and currently serves as a designer for SSC. “Not only does the car boast a class leading 0.279 drag coefficient, but also maintains an identical aero balance from 100 mph to well over 300 mph.”

If the Tuatara can indeed hit a top speed that’s “well over 300 mph,” it’s poised to become the world’s fastest production vehicle—a title that its predecessor, the SSC Ultimate Aero, held from 2007 to 2010. The current title holder, the Bugatti Chiron, became the first road-going vehicle to break the 300-mph barrier in September of 2019. The forthcoming Venom F5 from Texas-based tuning house Hennessey Performance—the SSC’s only other American competitor—is set to join the ultra-exclusive club as well.

The Tuatara aims to achieve the high-speed feat with power from SSC’s own twin-turbocharged 5.9-liter V8 that produces 1,750 hp when fueled with E85 and 1,350 hp while running on 91 octane. A CIMA seven-speed transmission capable of sub-100 millisecond shift directs the output the rear wheels.

In the tamed Sport Mode, the default configuration, the body sits at 4.0 inches tall in the front and 4.5 inches talk in the back. Track Mode lowers the ride height to 2.74 inches in the front and 3.25 inches in the rear, adjusts the geometry of the suspension for aggressive handling, increases shift responsiveness, and engages the active rear wing to deliver precision downforce.

Only 99 more models will be built at the company’s headquarters. Automobile Magazine reports that the Tuatara’s base price is $1,625,000 and climbs to $1,901,000 when specced with the High Downforce Track Pack.