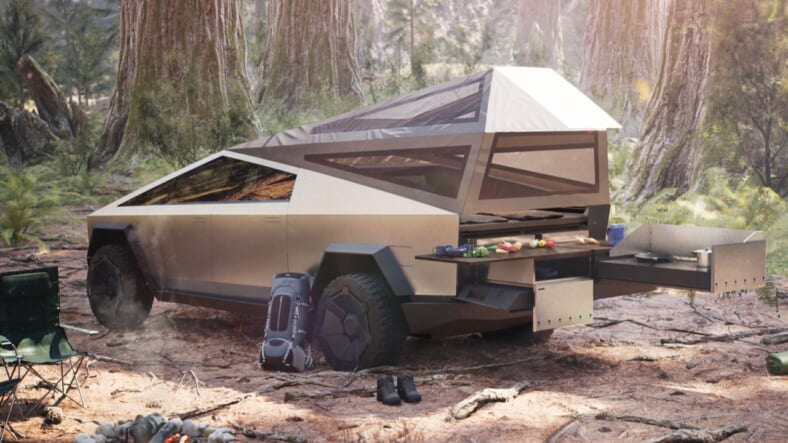 According to Robb Report, Tesla CEO Elon Musk recently said that a “sick attachment” for his EV company’s forthcoming pickup is coming and released renderings of camper and trailer configurations. The former shows a tent that matches the Cybertruck’s angular body paneling pitched over its 6.5-foot bed, a fold-out burner (which is presumably electric), cutting boards, and a retractable bench space with cooking accessories.

“From rugged to refined, Cybertruck is completely adaptable for your needs,” a brief description of the camper reads on Tesla’s website.

“Prepare for every experience with a versatile utilitarian design — including on-board power and compressed air.”

The trailer isn’t quite as dramatic, but still cool. “With the ability to pull near-infinite mass and a towing capability of over 14,000 pounds, Cybertruck can perform in almost any extreme situation with ease,” Tesla’s website reads.

Electrek notes that Musk has already confirmed a solar power roof as a Cybertruck option. If the same was offered on the trailer, it could conceivably harvest enough solar energy to compensate for the lost of battery power that comes with towing the extra load.

Creative Tesla fans often let their imaginations run wild with their own renders of products, and one such example of the Cybertruck camper from an anonymous Canadian concept artist recently made the rounds.

“So I’m liking something a bit larger, like this insert camper that you can add to the vault of the Cybertruck,” the designer wrote on a Tesla owners’ forum. “These renders need work, but I want something in the vault so no need to tow and can travel almost anywhere all the time. So hope that there will be a camper style like this by Tesla or 3rd party companies that would be amazing.”

Instead of a temporary tent or trailer, the unofficial images show a fully enclosed, compact overhead cab that’s built in to the pickup’s bed. No interior images were provided, but two configurations appear to show a single or dual sleeper.

All of these ideas are indeed “sick.” But for now, it seems likely that Musk and co. will focus on fulfilling the more than 250,000 Cybertruck preorders they claim to have already received.