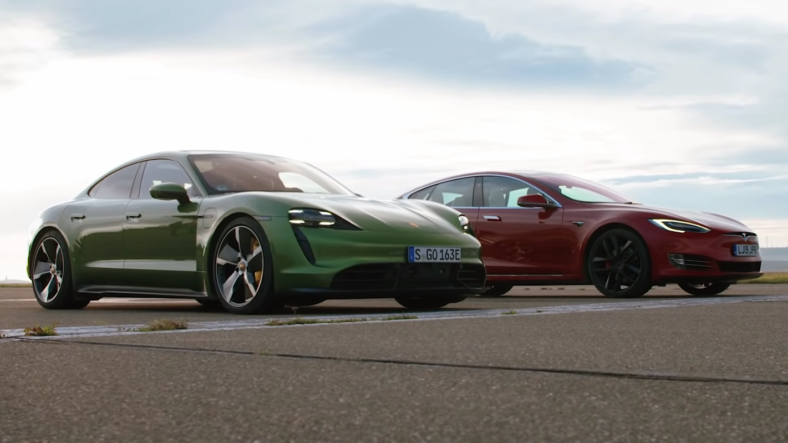 Porsche’s range-leading electric sedan, the Taycan Turbo S, was largely seen as the Tesla Model S Performance’s greatest rival when it debuted last month. Thanks to Top Gear, we get to see which currently available EV is quicker in a quarter-mile drag race.

“The Tesla is quicker from zero to 60 mph, according to the claimed manufacturer figures. But the Porsche is faster from knot to 100 mph,” notes Top Gear deputy editor Jack Rix from the seat of the Porsche. “This race is a bit close to call really, isn’t it?”

Both jumped off the line with more than an 85-percent battery charge to ensure each powertrain produced maximum output. While the Tesla and its new Raven suspension system had the edge initially, the Porsche had taken the lead by what appears to be a couple of car lengths by the end, putting up a 10.69-second time at 131.6 mph against the Tesla’s 11.08-second time at 124 mph.

For now, it appears $185,000 Porsche Taycan Turbo S is the fastest sedan money can buy. But for $92,615—nearly half of the Porsche’s price—you can pick up a Tesla Model S Performance. And let’s not forget that a sub-two-second Tesla Roadster is on the way.