The Mercedes X-Class Concept Pickup Is an Off-Road Monster 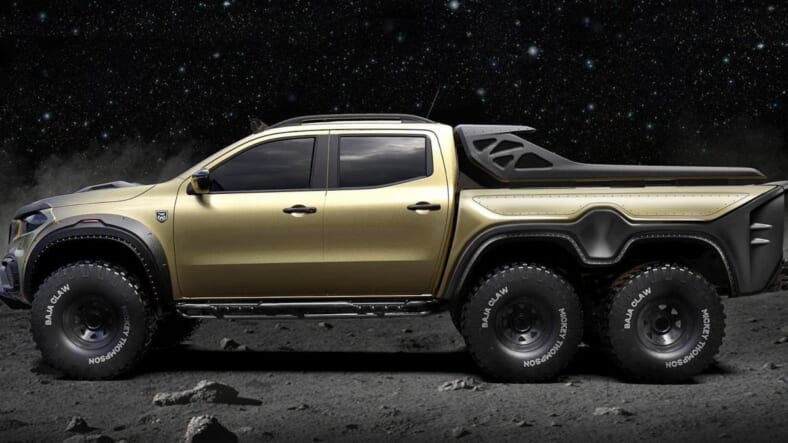 It’s no surprise that Mercedes’ first announcement about their X-Class pickup truck stirred up a lot of hype. The X-Class was more rugged than anything the German car maker had ever produced. But for Carlex Design, that wasn’t enough. In the spirit of bigger, bolder and badder, here’s their take on a 6×6 version of the X-Class, called the EXY 6×6.

Still in the rendering stages, Carlex has dolled up the utility vehicle with a bed extension, second rear axle, and other trim styling changes to the rear end, including a unique, bed-long riveted flare…and that’s just the 6×6 version. Carlex has at least another six versions that modify the X-Class but keep it as a 4×4.

The good news: the EXY 6×6 is actually more than a concept, as Carlex has announced definite plans to make this bruiser available in limited quantities. The bad news: like the Gelandewagen before it, Mercedes has no intention of bringing their new truck to the United States.

Currently, the X-Class is available in Europe with launches in South Africa, Australia and some South American countries set to happen this year. With Carlex’s tuning shop being based in Germany, the assumption is that their 6×6 version of the X-Class will also remain in the EU.

That being the said, the Gelandewagen’s original Europe-only status didn’t last long. American demand for the SUV, including celebrity buyers, inspired Mercedes to have a change in heart. It’d be surprising if an American version of the Mercedes X-Class—and this beastly 6×6 version of it—doesn’t make it to US roadways in the next few years.