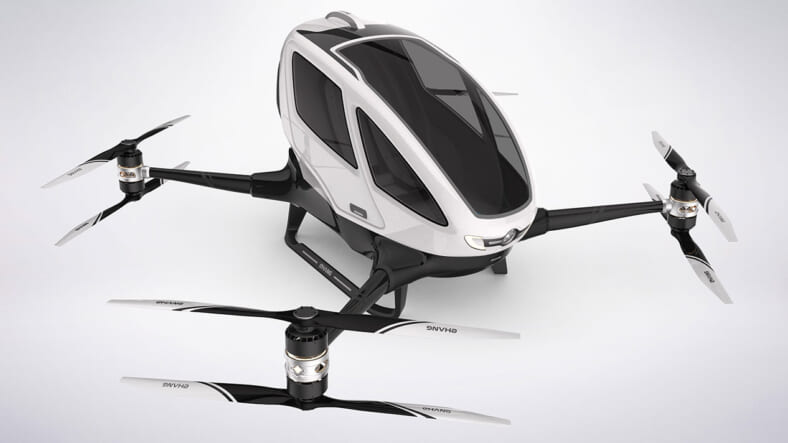 Looks like Uber was so inspired by Maxim’s August flying car roundup that they’ve issued a plan to offer what they term “on-demand urban air transportation” in just ten years.

People like the term “flying cars,” but they are more like automated helicopters, or big-ass drones with a seat in the middle. The difference between a future Uber-operated vertical take-off and landing (VTOL) vehicle and a helicopter is efficiency, the company says in a new report.

Befitting a “white paper” report, Uber has attempted to quantify the many outstanding questions and identified targets to achieve success.

Cost of a VTOL, like the Ehang 184? It should be on par with that of a new car, says Uber. Performance will be 200 mph top speed with one-minute take-offs and landings.

Safety is a reasonable concern, but Uber believes that VTOLs will be twice as safe as the family car, when measured in fatalities per vehicle mile, the industry metric. And there’s noise. With electric power, Uber says the VTOL’s annoying hum should be half as loud as a medium-sized truck driving past your house.

Once all the issues are addressed, Uber plans to be able to dispatch a drone to fetch you to work, just as it sends cars today. But you’ll get there much more quickly, without falling victim to ground-based traffic congestion.

“Normally, people think of flying as an expensive and infrequent form of travel,” said the report. “We also believe that in the long-term, VTOLs will be an affordable form of daily transportation for the masses, even less expensive than owning a car.”

So the future won’t feature flying cars so much as flying-instead-of-cars, if Uber’s prediction is correct. Billions of urban dwellers will surely approve.