The all-electric custom bike was designed with the help of Lockheed Martin aerospace engineers. 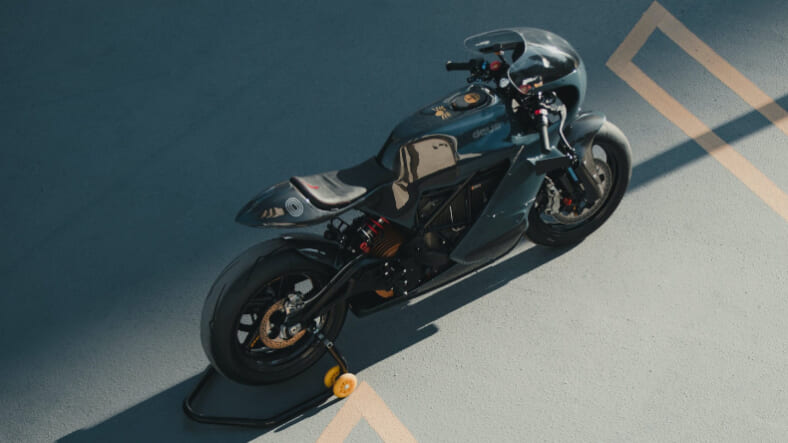 Deus Ex Machina’s Michael “Woolie” Woolway—the man behind this custom Ducati Hyper SP “Beastie“—is ending his time at the Australian customizer with a makeover of the all-electric 110-hp Zero SR/F, the energy-efficient brother of the insanely fast SR/S.

While it’s common to create custom builds in CAD before beginning production, Woolway didn’t even use drawings to design the one-off.

“I just reached back into sort of old shapes, and I started out with kind of a really old shape,” he told Zero. “No computer work, nothing like that. Just, foam plastic, shaping tools and, measuring tools and transfer tools and kind of the old school way. I did it like really the way that it would have been done in the thirties or forties or, you know, early fifties for sure.”

Despite being made out of just three molds attached using four bolts, the shell is a deceptively complicated all-carbon fiber core mat honeycomb structure that was specced with the help of Lockheed Martin engineers over a weekend.

“I really wanted to build a race bike or something that wasn’t really, a hundred percent street legal right out of the box I wanted to show it as kind of a competition bike,” Woolway added.

Show World Superbike forks and shocks, carbon fiber dynamag wheels, and custom race brake components from Spain are a few of the competition-worthy components used. Woolway also relocated the foot brake to a button on the handlebars in lieu of the clutch found on traditional gas-powered bikes. End caps made from a Formula One car winglet were added mostly to serve as another “cool and different” detail.

The lightning bolt-embroidered seat was made by LA’s Saddlemen—where Woolway now works—and the windscreen was hand-blown by Zero Gravity Racing. Like the retro approach Woolway took to the planning (or lack thereof), the paint coat also harks to the 50s and 60s.

“We wanted to highlight that it was mostly carbon so most of the panels are clear coated,” Woolway said. “I kind of drew back into like the fifties with scallops and pin striping like how you would have done a hot rod, in like 1962 or something. So again, I wanted to bring sort of some older techniques and details out in this project”