With Aaron Rodgers’ Season Likely Over, Will the Packers Call on Colin Kaepernick or Tony Romo?

Now that their stud QB has a broken collar bone, all bets are off. 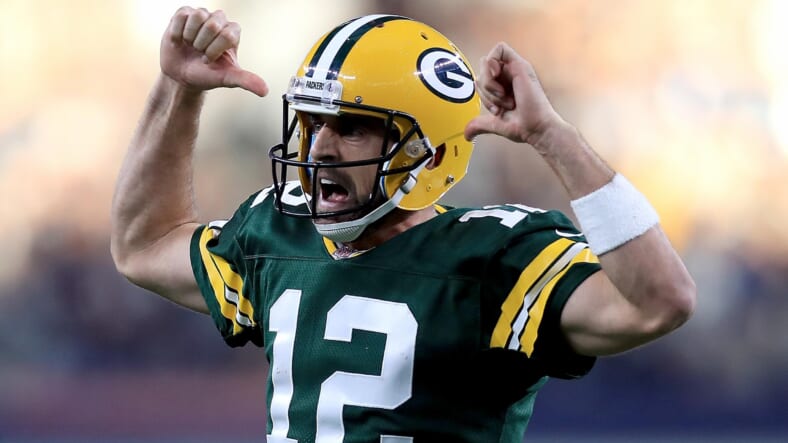 Vikings linebacker Anthony Barr is the most hated man in Wisconsin today, as Packers fans wake up in a world where their starting quarterback appears to be Brett Hundley. The second-year pro was forced into action Sunday after Barr hit Packers superstar Aaron Rodgers in the first quarter and broke his collar bone.

The hit was a little late and Barr appeared to drive Rodgers into the ground, which might explain why Rodgers was barking at Barr as he walked off the field with his arm hanging at his side.

After the game, Packers head coach Mike McCarthy said he’s moving forward with Hundley as his quarterback. But after a 18-33 performance with three interceptions, Hundley doesn’t look like he’d going to keep the job for long, and few would be surprised to see the team explore the free agent market for a Rodgers replacement.

The two most interesting names on the list: Colin Kaepernick and Tony Romo.

Kaepernick, who made waves over the weekend by accusing NFL owners of collusion, remains unsigned after opting out of his contract with the 49ers in the off season. There’s little doubt that he is a better player than Hundley or any other quarterback on the market. But would Green Bay want the distraction? And beyond that, would they prefer a lesser player who’s already familiar with the scheme and personnel over a more talented, but far less acclimated Kaepernick?

Another reason to consider Kaep? He’s a Milwaukee native who grew up a Packers fan.

Kaepernick isn’t the only unemployed quarterback whose name is being bandied about in Green Bay. Former Cowboys QB and current CBS football psychic Tony Romo is also a Wisconsin native. And many have suggested that he’d be a great choice to lead the Pack while Rodgers is down.

Just wondering: what if the Packers called Wisconsin’s own Tony Romo…?

Bleacher Report’s Mike Freeman thinks the 37-year-old Romo is a better option than Kaepernick and the man himself recently joked that a comeback may be in the works. And that was before the quarterback of his hometown team went down.

Mr. Witty, @tonyromo. NFL Network shows his Jan. 1 TD pass at Philly. Nantz: “Your last pass of your career.” Romo: “Was it the last pass?”

While both Kaepernick and Romo sound like long shots to land at Lambeau, they’re not the longest of shots to inspire speculation. After all, if the Packers want to replace Rodgers, who better than the guy Rodgers replaced?

Brett Favre when he heard Aaron Rodgers is out for the year#ComebackTime pic.twitter.com/qLCqAmMsuj