This was one helluva fight. 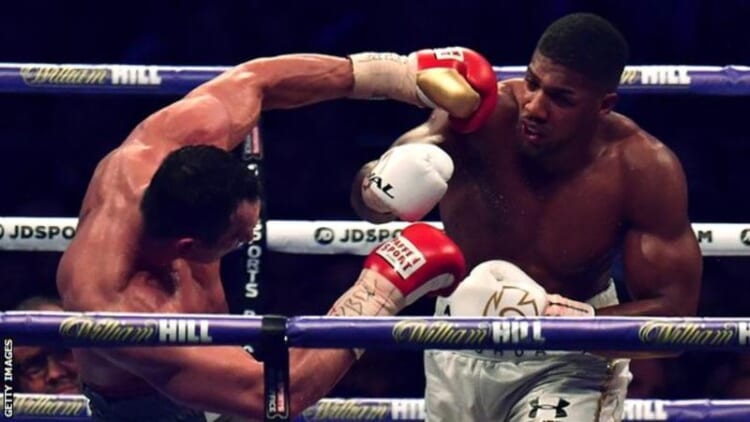 Heavyweight boxing crowned a new kingpin on Saturday when British slugger Anthony Joshua stopped former longtime heavyweight champ Wladimir Kltschko in the 11th round after a thrilling back and forth slugfest.

There were 14 years between the 27-year-old Joshua and 41-year-old Klitschko, the Ukrainian giant who ruled the heavyweight division for more than a decade before losing his last fight to Tyson Fury in 2015.

Between the age difference and Olympic gold medalist Joshua’s undefeated record, the British star was picked to win by most, with Klitschko entering as a betting underdog for the first time in his career.

@AnthonyFJoshua comes from behind to knock out @Klitschko in R11. 🥊https://t.co/AlzTiY6Wzh

But it turned out to be one of the most exciting heavyweight slugfests in years. Both men suffered dramatic knockdowns before Joshua ultimately triumphed, rocking London’s sold-out Wembley Stadium when the ref stopped the fight in the 11th round to save Klitschko from what would have been his third knockdown of that round.  .

When asked if he wanted a rematch, Klitschko was coy about whether he would fight again, but the Ukrainian was nevertheless extremely classy in defeat.

“The best man won tonight, and it’s an amazing event for boxing,” Klitschko said in the ring. “Two gentleman fought each other tonight and Anthony was better than me tonight.”

“It’s really sad I didn’t make it tonight. I was planning to do it. It didn’t work.”

Joshua had plenty at stake besides championship titles. As ESPN noted, beating a titan like Klitschko would have given the charismatic and confident former Olympian a direct route to “global stardom” in addition to the WBA and IBO heavyweight belts.

Klitschko—Dr. Steelhammer himself—likely wanted an opportunity to save face after his shocking 2015 loss to the Fury, who has since taken an extended break from to deal with drug and mental problems, and was called out by Joshua after the fight. A win would put the Ukrainian back at the head of a division he once utterly owned. ESPN noted that victory would’ve firmly placed Klitschko in the history books:

*He can join George Foreman as only the second man over 40 to win a heavyweight title.*He can become a three-time heavyweight titleholder, joining Evander Holyfield (4), brother Vitali Klitschko, Lennox Lewis and Muhammad Ali.*He can tie Joe Louis and Floyd Mayweather with the third-most wins in world title fights (26).*With the first bell, Klitschko will extend his division record by participating in his 29th heavyweight world title fight.

But it was not to be. The fight began with unusual speed for a heavyweight match, Klitschko the aggressor. Joshua was steady and focused, a sharp, tactical fighter. It was clear the Ukrainian wasn’t going down without landing some solid power punches, but Joshua dominated up through round 4. Then Klitschko decided to remind us why he was so thoroughly dominant for so long.

Klitschko exclusively on the front foot in the 1st.

In round 5 Joshua absolutely exploded and put Klitschko on the mat with a cut over his eye. Joshua had the advantage then, and he knew it. Klitschko was on the ropes and looked a little stunned—until near the end of the round, when the Ukrainian seemed to recover and connected hugely, rocking Joshua badly. It was a remarkable round on many levels, especially the resurrection of Dr. Steelhammer.

By round 6 the big men both looked tired—but shockingly it was Joshua who was perhaps more winded, and Klitschko took him down to the mat with a solid right hand. Round 7 was an even match, after Joshua essentially dominating early. It seemed like the younger fighter was shocked. Klitschko pressed his advantage, looking reinvigorated.

The following round was unprecedented in Joshua’s career—he’d never had a match go past the seventh before. He looked like he didn’t want to see what nine rounds were like and took it to Klitschko hard. The experienced former champ began to look wary as he saw he hadn’t rocked Joshua as hard as it seemed.

The ninth round was characterized by bodywork from Joshua and numerous clenches as Klitschko looked to slow his opponent’s efforts at building momentum. It mostly seemed like both fighters were coasting, saving energy for round 10. That was when Joshua was clearly looking to land some knockout blows—but couldn’t.

Until round 11, that is, when an uppercut and combination flattened the Ukrainian and left his badly dazed—and ripe for a second knockout moments later.

In the end, Anthony Joshua won handily, cornering Klitschko and pounding away until the referee stepped in and waved it off.

It looks like the heavyweight division is back, and Anthony Joshua is leading the way.