How Runners Are Using Marijuana To Amplify Their Performance

“Runner’s High” is taking on a whole new meaning. 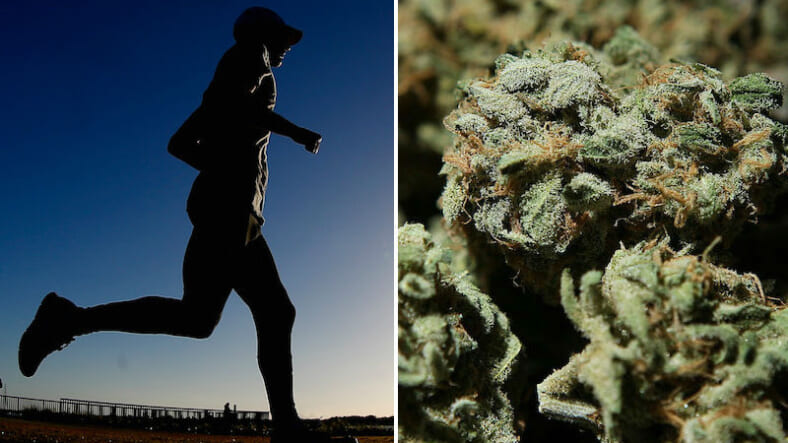 It seems like a contradiction. Smoking pot is widely regarded as unhealthy while running is quite the opposite.

Increasingly though, runners are turning to marijuana for a variety of reasons, from enhancing performance to just having more fun. This trend is not new. Ultra-Marathoners, the most hardcore breed of recreational runners, have been extolling the virtues of cannabis for years. But when The New York Times writes about runners who smoke on 4/20, it’s a clear sign that the trend has gone mainstream

“You have two different reasons potentially for using cannabinoids,” Marcel Bonn-Miller, a cannabinoid researcher at the University of Pennsylvania, tells the Times. “One is to enhance your ability to train. The other is recovery oriented.”

Marijuana isn’t a performance enhancer like steroids are. Blazing up before the hitting the trail isn’t going to change your body the way HGH does. Still, pot might make a run considerably more enjoyable.

“For me, it’s a spiritual happening,” Avery Collins, one of the most well-known pot smoking runners, told The Guardian. “Everything is perfect, everything is pure bliss.”

“It helps me stay in the moment and embrace what’s going on right then and there,” he added.

People have long touted the benefits of a runner’s high, the feeling of euphoria that can come with pounding the pavement. Dr. Bonn-Miller told the Times that there could be a relationship between that feeling and the high achieved with cannabis.

“There’s a lot of overlap in terms of the pathways that are activated between what’s known as a runner’s high and the high that comes from THC,” he said. “Both of those involve activation of the endocannabinoid system, so it’s not too surprising that THC might be used to enhance the runner’s high that’s gained from endurance exercise.”

Some runner’s use cannabis in recovery for its anti-inflammatory properties, choosing the natural drug over synthetic ones.

“After a 30- to 40-mile run, I’ll sit down, and my legs will keep throbbing and pounding; it’s like they think they’re still supposed to be going,” Collins told Men’s Journal. “That’s when the CBD compounds help tremendously. They calm down your legs and, because they’re anti-inflammatory, let them recover faster.”

And others say that it helps them stay physically fresh while running. Ultra-Marathoner Jenn Shleton told the Wall Street Journal in 2015 that marijuana can be the key to winning the grueling races in which she competes.

“The person who is going to win an ultra is someone who can manage their pain, not puke and stay calm,” Shelton said. “Pot does all three of those things.”