“I didn’t have Dwyane Wade and Kobe Bryant carrying me up and down the court,” Barkley said. 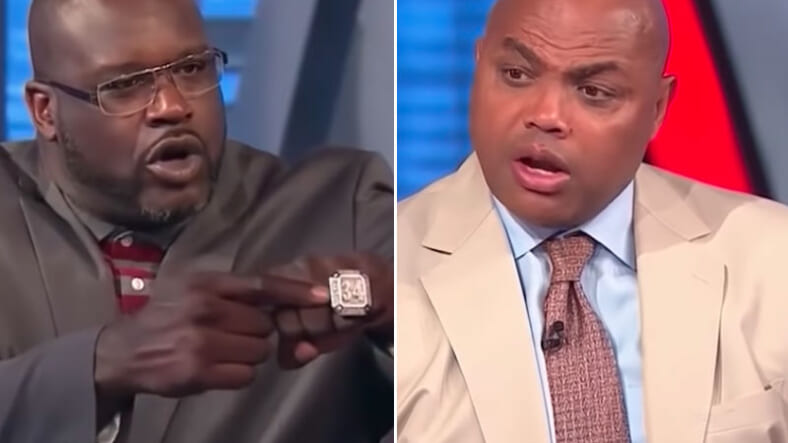 Chuck and Shaq get heated in a back-and-forth on coach-player relationships…#InsideTheNBA pic.twitter.com/ElQxwBV5s7

Shaq and Charles Barkley are like brothers. Two aging, giant brothers, who spend most of their time at each other’s throats but still have love for one another.

That dynamic was on display once again this week when the two Hall of Fame big men got into a scrap over the Toronto Raptors and head coach Dwayne Casey’s benching of star guard DeMar DeRozan at a pivotal moment.

Barkley argued that Casey screwed up because a coach has to have a good relationship with his star player. Shaq disagreed, citing his own ups and down with former Lakers coach Pat Riley.

Then things got personal.

“You got babied, that’s why you ain’t win,” Shaq said to Barkley, returning to his favorite put-down of ringless Round Mound of Rebound.

“I didn’t have Dwyane Wade and Kobe Bryant carrying me up and down the court,” Barkley said back.

“I’ve got three Finals MVPs,” Shaq said.  “Google me, Chuck!” he added, point at the fat ring on his fat finger.

The drama between Shaq and Barkely has been one of the many entertaining parts of these NBA playoffs, which are set to enter a new phase this weekend. After the Celtics put a nail in the Sixers’ coffin Wednesday night, there are now only four teams left in title contention.

In the East, Boston will try to keep LeBron from making the Finals for the ninth time in his career. They’ll have home court advantage, but they’re still the underdogs, and this guy is why.

Over in the West, the Warriors and Rockets might be playing for the real NBA title. These were the two best teams in the NBA all season and whoever wins will be huge favorite in the Finals regardless of their opponent.