The Niners’ QB is the second most hated man in Miami. 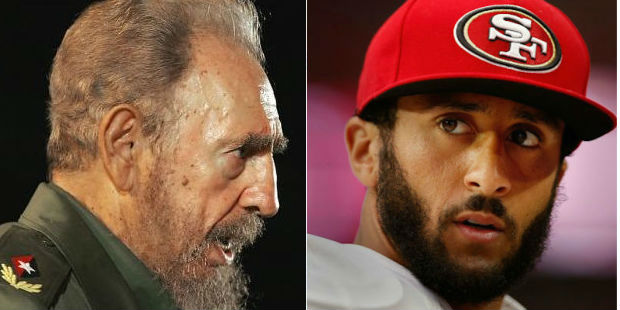 Back in August, Colin Kaepernick debuted the protest that would turn him into the most controversial athlete in America. After sitting during the national anthem before a preseason game, Kaepernick spoke to reporters in a t-shirt that bore images of Malcolm X and late Cuban dictator Fidel Castro. The shirt didn’t get much attention at the time, but it did last week when Kaepernick prepared to lead his 49ers into Miami.

On a routine conference call with South Florida sports writers, Kaepernick was asked to explain his apparent endorsement of Castro by Miami Herald columnist Armando Salguero. Kaepernick stumbled through his response and eventually said some kind things about Castro’s investment in education. This set the Cuban-born Salguero off. Here’s how he responded.

So I make the point to Kaepernick that aside from that awesome school system the Castro devils established, there was also that communist revolution we should consider, and the lack of free elections and justice. And after teaching folks the alphabet, to Kaepernick’s apparent delight, the Castros break up families, including mine, because some folks get out and others cannot.

This would have been a big story in Miami anyway, but after Castro’s death on Friday, it blew up. Which leads us to Sunday afternoon, when the Niners and Dolphins met at Hard Rock Stadium. This is how the crowd greeted Kaepernick:

Miami’s fans weren’t the only ones not feeling Kaepernick’s Castro praise. Dolphins linebacker Kiko Alonso, whose father is Cuban, said after the game that he went out of his way to make sure Kaepernick felt his presence on the field. He was successful. Alonso recorded 12 tackles, one interception and—with Kaepernick two yards away from scoring a game-tying touchdown—he planted the quarterback in the dirt to win the game.

How did a celebrate? With a tweet that’s NSFW if the people in your workplace speak Spanish. Here’s the translation, just in case you need it.