“The workout last week did absolutely nothing to enhance the chances that Colin Kaepernick is going to wind up with another team.” 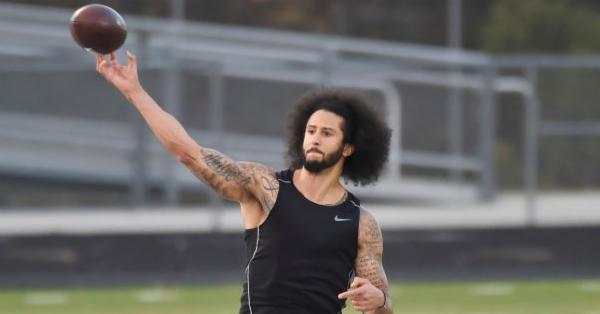 In news that may not really surprise anyone—including Colin Kaepernick—the controversial former San Francisco 49ers quarterback has received exactly zero response to his workout held in Georgia for a handful of NFL teams.

Quoting ESPN’s Adam Schefter, Bleacher Report detailed how Kaepernick has had “Zero. Absolutely zero” pickup after he went through a workout routine at an Atlanta-area high school for reps from teams including the Philadelphia Eagles, Kansas City Chiefs, and New York Jets.

While Kaep did say he’s “been ready for three years” at the workout, he can’t be that shocked that the NFL is wary, given he’s been more or less blackballed from the game over what could be seen as a relatively mild form of protest, one that’s often misunderstood.

This Colin Kaepernick deep ball during his workout was beautiful. pic.twitter.com/HOZnclngZZ

Still, Kaepernick said at the workout that he and his reps are “out here. We’re ready to play. We’re ready to go anywhere. My agent, Jeff Nalley, is ready to talk [to] any team. I’ll interview with any team at any time. I’ve been ready.”

It did not help that Kaepernick changed the terms of the deal where the workout was concerned and did it at more or less the last minute. It was first scheduled on the NFL‘s behalf (supposedly influenced heavily by Jay-Z) and was set to take place at the Atlanta Falcons practice facility.

But Kaepernick, not trusting the league, scheduled his own routine at a high school 60 miles from the Falcons facility.

Also, while it’s likely no one doubts Colin Kaepernick’s gifts, his actual record may not be in his favor—he was 28-30 as a starting QB when his contract expired.

It looks like Jay-Z might not be so willing to pull any more strings, as he reportedly was dismayed that Kaepernick turned a “legitimate workout” into what the hip-hop mogul saw as a publicity stunt.

So, the impasse continues.