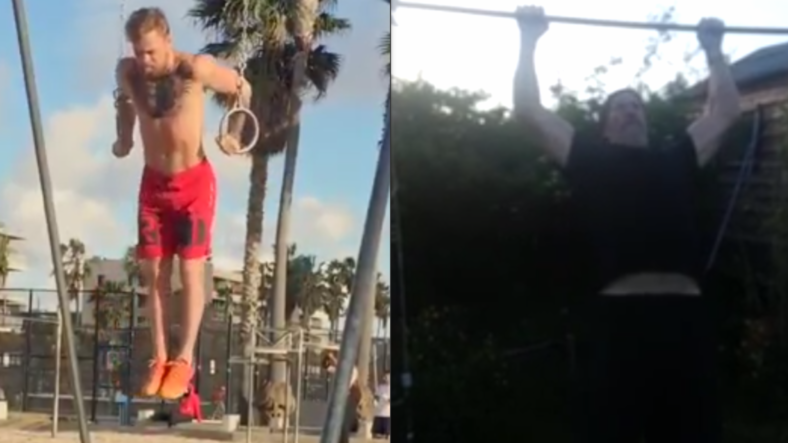 Conor McGregor may possess extreme confidence in the Octagon, but the UFC superstar was downright humbled by a 64-year-old who challenged him to a muscle-ups contest online.

The video above is making the rounds on Reddit and other sites for good reason. In it, a savagely fit senior citizen named Willy O’Toole sends McGregor the following message:

“I saw a video of you doing muscle-ups. I hope you can still do ’em when you’re my age, at 64,” the aging Irishman says.  He then proceeds to knock out 7 reps of the insanely difficult exercise with perfect form.

Not only did McGregor respond to the old guy, but he did so with a very real sense of humility.  “64 years of age, he’s banging out muscle-ups better than anybody,” marvels McGregor, before heading to the pull-up bar to put up five of his own.

“There you go, brother,” McGregor says afterwards. “Still not with the technique you have, but thank you for the video.”

Again with the modesty! Truth be told, McGregor actually does have pretty solid technique, and the video below proves it.

You can tell by looking at McGregor’s form that he pushes himself up more than he uses the swing to explode up — a common mistake.

So, you want to do muscle-ups now, too? You’re going to need to practice, that’s for sure. Get yourself a good pull-up bar and get swinging.

And then issue a challenge to Conor McGregor. Who knows? He just might respond.