“He may have wrestled Dagestani bears, but he has never wrestled an Irish gorilla.” 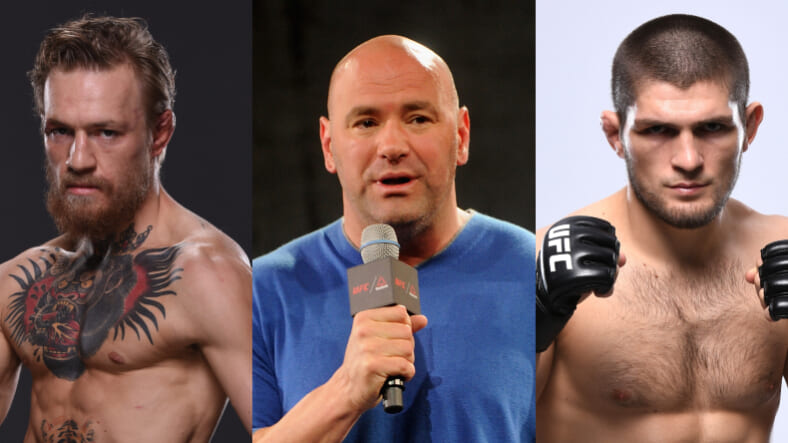 Conor McGregor and Khabib Nurmagomedov’s megafight for the UFC lightweight title is just days away, and all parties involved are hitting the late night talk show circuit to hype the contest.

But first, Kimmel began by asking if McGregor’s infamous bus attack and subsequent arrest were part of a ploy to generate media attention.

“When the law gets involved and it gets legal… we’re not hyping a fight when that happens,” White said.

White then detailed the sequence of events that led to team McGregor and team Nurmagomedov’s larger-than-life beef.

“Khabib is from Russia, too. There was some kind of Russian stuff going on between those two in New York, and Khabib slapped Artem.”

“Artem picked up the phone and called Conor and said, ‘Khabib slapped me,'” White continued.

“Conor fueled up the G650 and loaded it up with Irish guys. They flew to New York and attacked the bus [Nurmagomedov] was on.”

Almost everyone knows about the Irish fighter, but casual fans may not be as familiar with the Dagestan-born wrestling specialist he’ll face at UFC 229. White gave Kimmel a little background on “The Eagle,” too.

“The reason this fight is so big is because it’s two of the absolute fighters in the world fighting in their prime when they should be fighting,” he added.

Kimmel probed further into Nurmagomedov’s past. More specifically, the host asked White about a video in which the undefeated fighter appears to be wrestling a freaking bear as a child.

White didn’t say much other than “it’s real.” But McGregor was happy to share his thoughts on the clip during a video chat appearance on Conan.

“He may have wrestled Dagestani bears, but he has never wrestled an Irish gorilla,” McGregor said. “And that’s what he’s about to face on Saturday night.”

Oddly, “Mystic Mac” didn’t predict the round in which he plans to finish Nurmagomedov. But he did describe flaws he sees in his opponent’s game.

“I believe he’s slow, he’s flat-footed, his striking is very average, and I look to expose that.”