“I don’t play those games…” 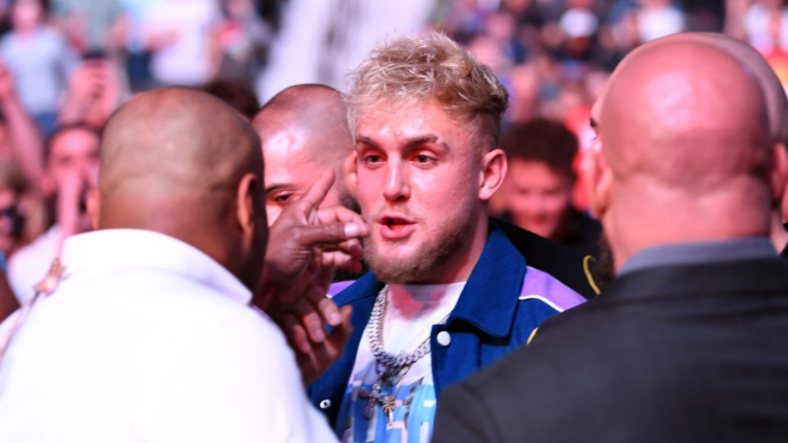 Drama was not limited to the Octagon at UFC 261 in Jacksonville Saturday night. “I swear to God, I just saw Jake Paul,” retired fighter Daniel Cormier told Joe Rogan, “I pointed at him and said, ‘Don’t play with me,’ because I’ll smack him in the face.”

“He’s right there,” Cormier — attending as a commentator — continued, “I’ll slap him. I don’t play those games, Joe.”

JAKE PAUL AND DC ABOUT TO DUKE IT OUT WTF pic.twitter.com/vliMaO3AiY

DC and Jake Paul having some words with each other #UFC261 pic.twitter.com/3DaiffkaDM

Jake Paul’s turn from Youtuber to fighter happy to play the heel whenever he gets the chance wasn’t lost on the crowd in Jacksonville. They didn’t like his interaction with Cormier, either. As he headed for his seat, the crowd chanted, “Fuck Jake Paul.”

Joe Rogan wondered what was up and that was when Cormier clued him in. It didn’t seem like a choreographed moment, but it certainly played into Paul’s efforts at becoming a legit fighter. Efforts that — after his victory over Ben Askren in the first round of their fight– turned to lobbing bombs at Daniel Cormier.

Here’s just a portion of what Paul said on his brother Logan’s podcast, Impaulsive, in the video above:

Daniel Cormier (was saying) ‘that’s my boy Ben, he’s gonna beat Jake, he pushed him in the face so he’s gonna win now, chirp, chirp, chirp.’ I knock him out and he’s on Twitter, ‘Ben, are you serious, bro, you went down like that. Ben are you kidding me, I can’t believe you did that to the MMA community.’ Shut the fuck up bitch. I’ll beat the fuck out of your fat ass too, just like Stipe did, Cleveland shit. I’ll beat the fuck out of Daniel Cormier.

Daniel Cormier retired from professional fighting after he lost to Stipe Miocic at UFC 252.

For his part, Cormier may not like the smack talk from the podcast, but he doesn’t appear to take Jake Paul seriously at all, telling ESPN “This dude would never fight me. I would kill him. Why would I ever fight someone like that?”

Ben Askren pulled in a reported half-million for his fight with Paul. While Cormier supposedly earned over $6.5 million in his UFC career, $500,000 or more isn’t small change — between that and taking lip from Paul online, he might end up changing his mind.