Derrick Lewis Says Having Sex Will Prepare Him for UFC 230 Fight Vs. Daniel Cormier

“The sex really been helping my hips.” 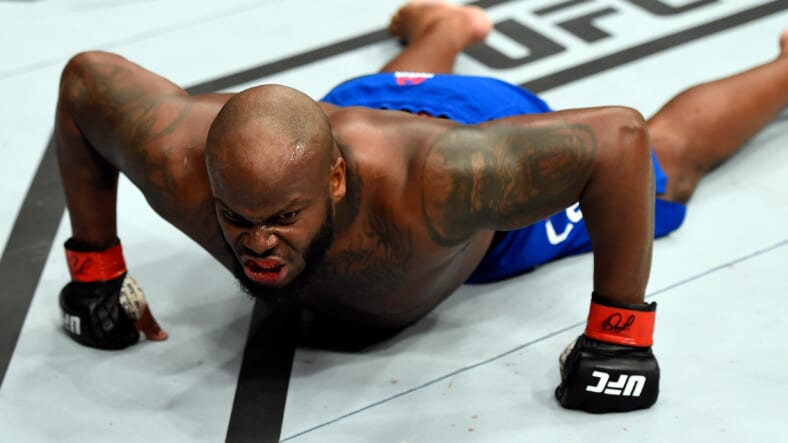 Derrick Lewis is making full use of his famously “hot balls” to prepare for his heavyweight title fight against Daniel Cormier on Saturday.

The fan favorite knockout artist, who holds a professional MMA record of 21-5, claimed that he’s been having more sex to improve his cardio ahead of UFC 230.

“I’ve been doing nothing but cardio. Even the sex. The sex really been helping my hips.”

Staying limber against a supremely skilled former Olympic wrestler like Cormier will undoubtedly help Lewis when the fight inevitably goes to the ground.

“I know Cormier is a wrestler so you really got to get them hips down on him, so I’ve been working them hips really good.”

Lewis went on to say that he’s testing the dispelled myth that sex before competition hurts performance.

“A couple of times, I had sex the same day as I fought,” he said.

“Just to see if that myth was right, and it wasn’t right. But I was sleepy afterwards but I still had the energy though.”

As Bro Bible notes, “The Black Beast” is roundly regarded as one of the most entertaining athletes in the UFC. Following his last-minute knockout of Alexander Volkov at UFC 229, Lewis famously took off his trunks, and an immortal MMA meme was born.

When color commentator Joe Rogan asked why he stripped down to his compression shorts, Lewis’ response was even more legendary than his performance.

Rogan kept it professional at the time, saying, “I understand.” But after the clip went viral, the comedian later wore a shirt sporting Lewis’ now-classic line on episode #1190 of The Joe Rogan Experience podcast.

“Thanks to @joerogan for wearing my shirt today on the show,” Lewis wrote on Instagram.

Mentioning his gonads during a live PPV event wasn’t even the most hilarious soundbite Lewis has thrown out during an Octagon interview. After his third-round knockout of Marcin Tybura at UFC Fight Night 126 earlier this year, he said this:

“I’m going to try and rest up a little bit so I can be strong in the fourth round with (my wife). I’m going to knock it out of the box. To my baby, April, better get ready girl, I’m going deep!”

And then there was his condemnation of now-retired fighter Travis Browne. After he slept Ronda Rousey’s husband at Fight Night 105 last year, Lewis spoke openly about Browne’s history of domestic abuse.

“I appreciate it, I appreciated [the referee] letting the fight go a little longer than what it should. I just wanted to get my anger out on Travis’ face because he likes to hit on women. So I appreciate him for doing that. I keep it real.”

Lewis again called out Browne for putting “his hands on women,” and then asked, “Where Ronda Rousey’s fine ass at?”

If Lewis becomes the new heavyweight champ this weekend, we fully expect the best post-fight Octagon interview of all time.