“He’s doing this for pride, for respect, to prove that he’s still an important piece of this 155 pound division. That’s a dangerous man.” 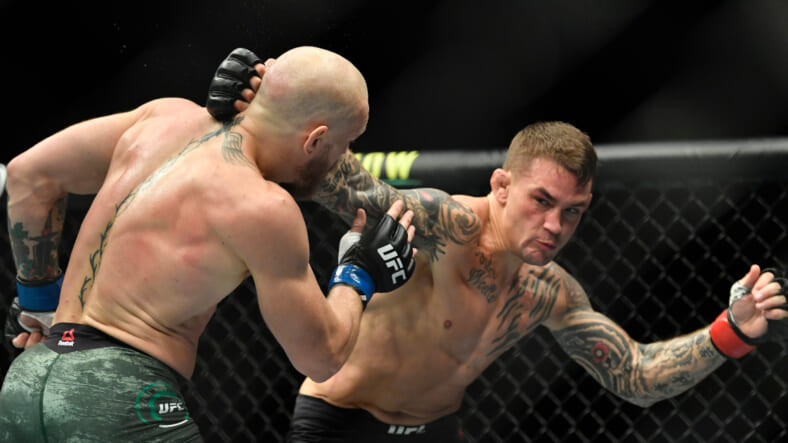 In Dustin Poirier’s eyes, there’s only one way Conor McGregor wins the their third fight at UFC 264 on July 10.

In a new interview with ESPN’s Brett Okamoto, Poirier predicted that McGregor will defend against the types of leg kicks that led to the Irishman’s second-round TKO in their second bout in January.

Poirier even offered what he sees as McGregor’s best strategy: to be extremely aggressive early, before Poirier can get dangerous in later rounds.

“I think he’s going to be more aggressive and he’s not going to let the fight unfold. As it unfolded [last time] and as I got more comfortable, he realized, ‘Oh shit, this guy can really fight!'”

“If I was him, I would try to touch me early and keep me out of rhythm because if this thing starts to blossom into a fight in the second, third and fourth [rounds] and we start hurting in there, start having to grind it out, start getting a rhythm then I win that fight 10 out of 10 times.”

Poirier’s confidence in his own ability shouldn’t be mistaken for disrespect for McGregor’s.

“He’s not doing this for money. He’s doing this for pride, for respect, to prove that he’s still an important piece of this 155 pound division,” Poirier added.

“That’s a dangerous man. He’s not coming out here to damper his name anymore, to get knocked out again or to get submitted again. He’s coming to build McGregor Enterprises back to where it was.”

For McGregor’s part, he’s excited to showcase new “weapons” against his rival in the Octagon.

“(I’m going to) give him a proper head kick,” McGregor said during an Instagram Live Q&A session.

“There will be a lot of weapons produced on the night, that’s for sure. He wants mixed martial arts? He’s going to get it.”

The two rivals have been busy throwing verbal jabs on social media. Last week, McGregor tweeted at Poirier that the first one to shoot for a takedown was a “dusty bitch.”

First one to shoots a dusty bitch. pic.twitter.com/pO7WdCTsGu

Poirier responded to ESPN: “How ‘bout the first one to get taken down is a dusty bitch? This is mixed martial arts. Put it all together. It reeks of insecurity to me.”

UFC 264 kicks off Saturday, July 10 on pay-per-view at the T-Mobile Arena in Las Vegas.