Floyd Mayweather Wants One More Fight, But He Needs an Opponent First 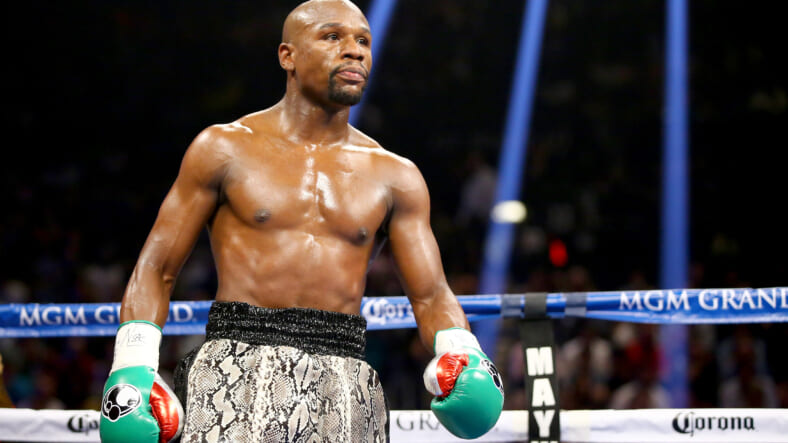 In August, Floyd Mayweather walked out of the ring for what many thought would be the final time. The 15-time world champion had just dismantled one of the fight world’s biggest celebrities in Conor McGregor and recorded a huge pay day in the process. With a 50-0 record, he could finally retire knowing that his name belongs in the conversation about the greatest boxers of all-time.

But according to TMZ, Mayweather may not be done boxing after all. The 40-year-old is “kicking around the idea of another comeback,” TMZ says.

Floyd Mayweather has been telling people close to him that he’s considering a 51st fight — and he’s been training like a maniac in the gym … but we’re told there has been NO official movement … yet.

Showtime Sports’ Stephen Espinoza lent some credence to the idea, telling TMZ that while a comeback isn’t imminent, “It’s Floyd’s call at some point.”

If Mayweather were to get back in the ring, there would be no shortage of fighters willing to get in there with him. The first potential opponent to consider would be a Conor McGregor rematch, but that seems unlikely given the UFC star’s recent misbehavior and Dana White’s eagerness to get him back into the Octagon.

British welterweight Amir Khan is already angling for a shot at Mayweather, recently tweeting that he thinks he would “cause problems” for the retired-for-now fighter.

In any fight I’ve never been out boxed. Mayweather khan fight would be a game of chess. Speed movement and accuracy will cause him problems

Mayweather laughed off Khan’s challenge. “For the last five years all I have been hearing is Amir Khan running his mouth off that he deserves a shot against me,” he recently told The Daily Star. “It’s nothing new for me. Every fighter out there wants a chance against me because they know, win or lose, it’s going to be a big payday for them.”

So, if we rule out McGregor and Khan, who does that leave? Mayweather would probably never get in the ring with someone like the fearsome Terence Crawford, the best welterweight in the world and perhaps the best pound-for-pound boxer alive, or even Gennady Golovkin, who may be too much a threat to Mayweather’s undefeated record given his impressive draw against Canelo Alvarez that most boxing observers thought he won.

That hasn’t stopped some boxing fans from getting excited about the possibility though.

Aside from GGG, Canelo might be the only other boxer who could give Mayweather the pay day he wants. And while Mayweather easily outboxed Alvarez when they fought in 2013, the Mexican superstar has improved considerably in the four years since that bloodless decision loss

Given all of that, Mayweather might consider doing as he did before and fighting someone who isn’t a boxer. Who, though, remains a mystery.