“I was surprised by him…He’s better than I thought he was.” 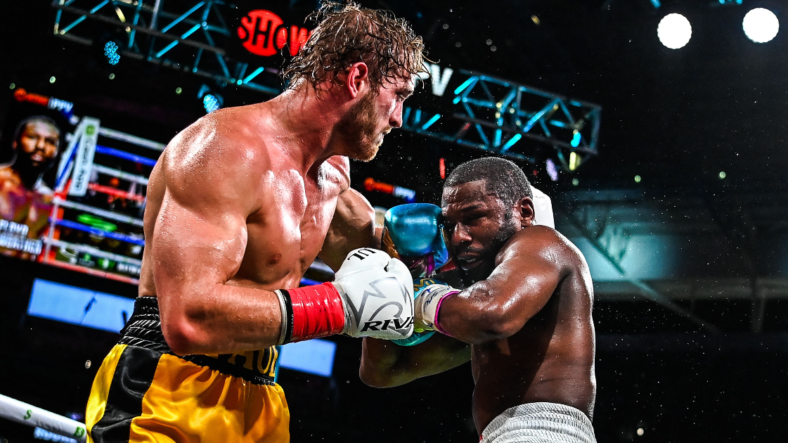 Mayweather, who is 50-0 as a professional, began the fight as he often did in his heyday: by hanging back and downloading information on his inexperienced, but significantly larger foe.

That trend continued into to the second and third rounds, at which most viewers suspected he would crank up the offense en route to a knockout.

Paul, however, remained upright until the final bell. While there was not a single second that he had Mayweather in any real danger, he showed commendable toughness, and even managed to land a few punches of his own—a definite moral victory considering Mayweather’s status as one of the greatest defensive pugilists ever.

It was an outcome that surprised many viewers—and Mayweather himself.

“I was surprised by him,” the 44-year-old legend admitted in his post-fight interview.

“Great, young fighter. Strong, tough. He’s better than I thought he was.”

While Mayweather was quick to give Paul props, he also made it quite clear that he didn’t put forth his best effort, emphasizing that, for him, this exhibition was all about having fun.

“Tonight was a fun night,” he said. “I fought against a heavyweight but I had fun. I had fun, and I’m pretty sure he had fun.”

Paul was quick confirm those suspicions—and also shared his own surprise about surviving eight rounds with the unbeaten legend.

“This is one of the greatest moments of my life,” the YouTube star said in his post-fight interview, grinning ear-to-ear. “Damn, I’m happy.”

“You never know with this guy,” he added. “I’m gonna go home thinking, did Floyd let me survive?

“It’s an honor to grace the ring with him. This is the coolest thing ever. I’m happy I made it out. He’s old but he’s tough to hit.”

As for what’s next for the two stars, neither offered any concrete information in the immediate fallout of the fight.

“We don’t know what the future holds but I’ll talk it over with my team and see where we go from here,” Mayweather said.

“I don’t know, let me get a little better,” Paul echoed, joking that a Mayweather rematch could be in the cards. “Maybe I can end it next time.”

While neither man provided much in the way of clues as to what’s next, both have options.

Mayweather assured post-fight that his days as a pro are over, but left the door open to future exhibitions.

On that note, a rematch with Paul is a possibility—as is a fight with the YouTuber’s younger brother Jake Paul, who is seemingly taking “The Sweet Science” even more seriously, with three straight knockout wins on his record.

Mayweather, who previously called the mismatched Paul exhibition bout “legalized bank robbery,” also recently expressed interest in a rematch with former two-division UFC champion Conor McGregor, although that fight feels like a bit of a long shot, given the decisive outcome of the pair’s first fight.

For Paul, the options are no less plentiful. He and his brother have been targeted by a long list of professional mixed martial artists, such as Bellator fighter Dillon Danis and former two-division UFC champion BJ Penn.

He also has a seemingly endless reserve of fellow YouTube stars to fight, and has even expressed interest fighting his own brother at some point in the future.

Needless to say, we likely haven’t seen the last of Mayweather, Paul, or the bizarre brand of pugilistic circus they’ve both taken a shine to.