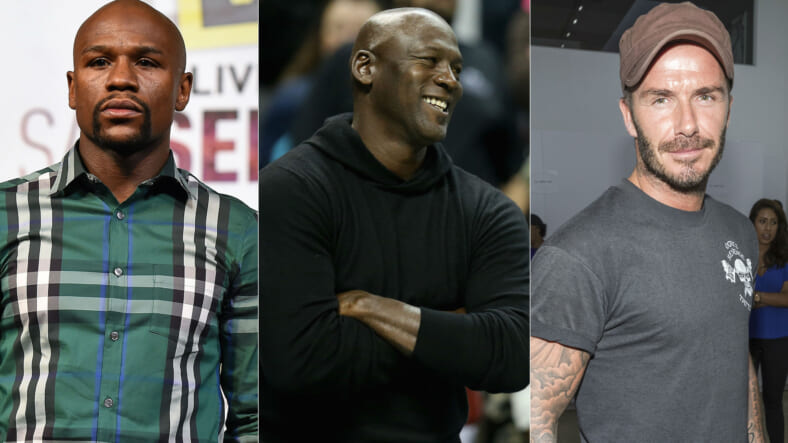 A lot of people have gotten rich playing sports, but the athletes who are so rich that they’re on this list have done much more than excel at a game. They’ve figured out how to parlay their athletic prowess into endorsements and business deals, eventually making more money off the court than on it.

That’s the key to earning a true fortune as an athlete, whose talent will eventually fade. If a former superstar is still getting paid once that day arrives, then he has done something right. And he might one day find himself on this Forbes list.

The Diesel was paid nearly $300 million on the court, but he’s always been good at making money away from basketball too. Remember Kazaam?

Becks is this highest earning soccer player of all-time and it’s not just for his work on the pitch. Forbes notes that the English legend pulled in $75 million in 2014, the year he retired, with a couple boffo business deals.

At 46 years old, Lefty is still plugging along in the PGA, adding to his already eye-popping $760 million in the bank.

This Halloween costume speaks for itself, “Money Man”.

Imagine how much it must hurt Money’s ego to be at number seven on this list. And then imagine how much you’d be worried about a list if you had $765 million.

Over his 20-year career, Bryant made $328 million from the Lakers. Thanks to endorsement deals, he more than doubled that for a $770 million in total earnings.

Welcome everyone to Michael's paddock! We love to share memories with you and what better start could there be than the upcoming anniversary of Michael’s first world championship title. From November 13 this page will be our meeting place to collect and exchange memories and to celebrate Michael's many achievements, established as a thank you gesture to all you wonderful fans. #TeamMichael #TeamMS #keepfighting

Formula One may not move the needle much in the U.S., but around the world Schumacher’s enough of a stud that he’s hit the nine-digit mark in career earnings, with $1 billion even.

As we work our way through stops in seven countries, a quick note of thanks to my friends at @Rolex for their hospitality at @Wimbledon. 🎾⌚️ #rolex #wimbledon

In 100 years, the Golden Bear may be known less for playing on golf courses than for designing them, a business that has helped him build $1.15 billion in career earnings.

Welcome to Round 2 of #APinv, #ArniesArmy! Tune in to @GolfChannel at 2pm ET for live coverage. @ArniesArmyCF

It took Arnie nearly two decades to earn a million dollars from golf, but by the time he died in September he’d cashed checks worth $1.35 billion. Credit goes to a brilliant business mind that led him to, among other things, buy up prestigious golf clubs and hawk a drink named after him with his face right on the bottle.

3 rounds down. 1 to go. #heroworldchallenge

The $1.65 billion Tiger has pulled down is impressive, especially when you consider how much more it would be if he could have kept his pants on.

Won the tournament the other day with buds

A photo posted by MICHAEL JORDAN (@theofficialmichaeljordan) on Jan 3, 2014 at 11:29am PST

His Airness only made $93 million playing the game that made him a legend, with the bulk of his $1.7 billion in career earnings come from business venture. Nike’s Jordan Brand alone earned him $100 million each year.