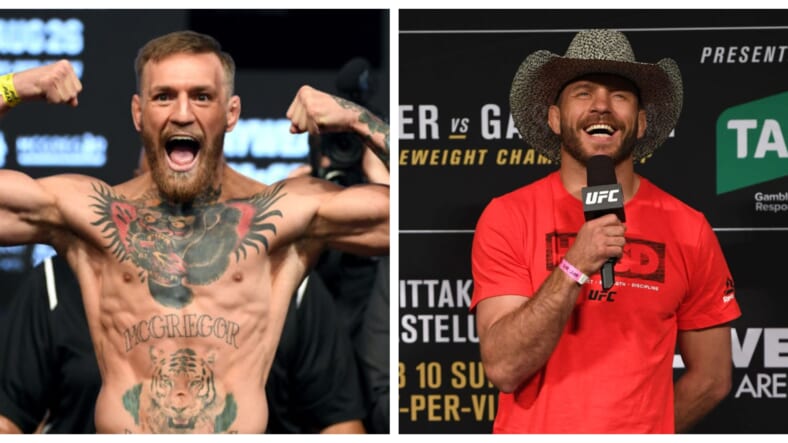 No one’s seen much Conor McGregor since his ill-advised title fight with Khabib Nurmagomedov in October, 2018. Regardless, the idea he might set up a fight with Donald “Cowboy” Cerrone has had fans intermittently abuzz.

McGregor hasn’t had a win since his title win in 2016. He did his stunt boxing match with Floyd Mayweather, yelled at people, lost to Nurmagomedov, and mostly rolled around in his piles of money while drinking Proper 12.

In the same period of time, Cerrone has blasted through eight fights with striking victories over the likes of Mike Perry and generally shown potential for becoming an impressive McGregor foe.

Based on his Insta, Cerrone certainly agrees.

It’s not a done deal, though, even though both McGregor and UFC president Dana White seem amenable.

Speaking with Brendan Schaub on his MMA show (see above), Joe Rogan outlined why McGregor vs. Cerrone isn’t a done deal.

“They were trying to do ‘Cowboy’ versus Conor,” Rogan said, “and apparently the sticking point was that it was going to be a co-main event.”

Rogan went on to say he thought the idea was “that they have to have world titles as a main event for pay-per-view.”

“I think [McGregor is] only interested in big fights,” Rogan concluded. “Like things that excite him now because he’s got so much money and so much success. It’s just one of those things.”

He’s likely right. But check out the dual pics of McGregor and the Cowboy above. Seems like a pair of well-matched personalities and skills.

Still, McGregor can only go so long before he probably wants to stir the pot again. He could definitely do worse than to flick Cerrone’s cowboy hat off his head and see what happens next.