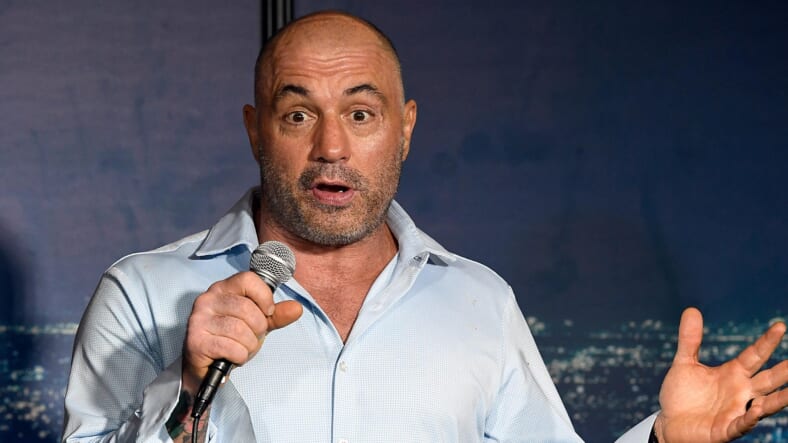 UFC commentator Joe Rogan isn’t done beefing with Stephen A. Smith about the ESPN star’s dissing of Donald “Cowboy” Cerrone’s performance at UFC 246, where Cerrone was smashed in just 40 seconds by Conor McGregor.

The squabble started after Rogan criticized Smith for saying he felt like Cerrone had “quit” against McGregor, even though a battered Cerrone left the Octagon with a broken nose and broken orbital bone.

Smith fired back at Rogan while justifying his original comments, and Rogan responded this week on his Joe Rogan Experience podcast about why he took such issue with Smith’s fiery hot take.

“I was upset at Stephen A. Smith and he made a video responding to me,” Rogan said. “Stephen A. Smith, I guess I should respond–you’re a very entertaining guy, I like you a lot, and I appreciate the props you gave me in that video, but you’re wrong. ‘Cowboy’ got fucked up with those shoulders in the clinch. He had Conor’s arms tied up and they’re in close spaces, Conor dips low and slams the bone of the shoulder into the nose.”

“He’s lost before. Every human can lose, especially when you’re fighting guys like Darren Till and Jorge Masvidal and these fucking animals that he’s fighting. He’s fighting the cream of the crop like Conor, and Conor broke literally broke his face. He broke his nose and he broke his orbital bone.”

You're wrong on this one, @joerogan. pic.twitter.com/eU140zXlcW

“I think the problem is Stephen A. Smith, who’s a very entertaining guy and is very knowledgeable about other sports, this is not his wheelhouse,” Rogan said.

“That style of dismissing athletes and putting people down–that’s how he made his name and it’s fun to listen to. He’s a fun guy to listen to. He talks great shit. I just think that this sport demands more appreciation, more respect and it demands a higher level of reverence to the athletes who literally put their lives on the line. It’s different.”

Unsurprisingly, Smith did not agree with Rogan’s and McGregor’s calls to apologize to Cerrone for suggesting that the rugged MMA veteran had “quit” at UFC 246, reports MMA Fighting.

“I thought it was excessive and unnecessary. I certainly have profound respect for him, what he means to the UFC and MMA sports, who he is. He was incredibly nice to me, and I’ll continue to be respectful and very nice to him.”

“I harbor no animosity or whatever. I just thought to disagree with me would be one thing, but to act like I didn’t even belong at the event because I have an opinion that was different than yours, I thought that was unfair.”

“I will not apologize, and I will not backtrack from my position, and I don’t care what Conor McGregor or Joe Rogan says, although I profoundly respect them both,” Smith added. “We will just have to respectfully disagree on what we saw.”