“His impact off the field from a societal standpoint is legendary and straight admirable.” 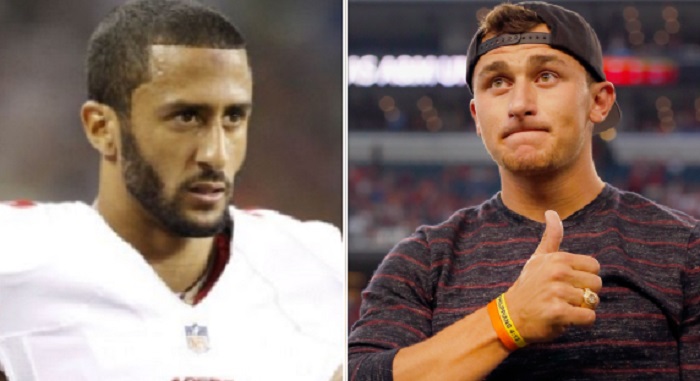 Johnny Manziel is aware people have been contrasting the states of his and Colin Kaepernick‘s careers, and he’s damn tired of it.

Manziel’s career was marred then completely stalled by bad behavior, but in a tweet storm he unleashed Saturday one thing came through: Johnny Football knows what’s up.

Manziel had the opportunity to do his thing for some scouts from the NFL earlier this week, and Kaepernick fans weren’t happy about it. Sportswriters like SI’s Jimmy Traina pointed out that neither QB was to blame for Manziel getting a chance with the NFL while ignoring Kaepernick.

Johnny Manziel, for his part, apparently had enough of this conversation, and with his tweets made it clear: He’s on team Kaepernick.

This will probably cause an uproar, but I’m tired of the @Kaepernick7 vs myself comparisons and anger. Kap is doing amazing things right now changing lives and donating millions of dollars. His impact off the field from a societal standpoint is legendary and straight admirable.

Standing up for people who often don’t get heard and for a race that continually deals with problem after problem in this country for CENTURIES. This world we live in is absolutely crazy and I believe what he’s doing has an amazing impact.

The facts of the matter are the reason he’s not being signed are non football based. The guy took a team to the Super Bowl and continuously wreaked havoc on the NFC West and the league. Maybe he had a bad year two years ago but he’s not a bad player and that’s a fact..

In my opinion the guy still has a lot in the tank but it’s not my place to say what he wants to do with his career. All I can speak for is myself and trying to turn my life around from the depths it was in. God bless and have a great Saturday…

I rock with you @Kaepernick7 you’ve always been good to me and I appreciate that. All the best in your journey my friend wherever that takes you

It’d be easy to be cynical and conclude Manziel is putting on a good face, this is just part of a goodwill tour designed to get him back into the NFL’s good graces in a moral way.

These really read like the words of a guy really feeling a little bit of outrage on Kaepernick’s behalf, especially this: “The facts of the matter are the reason he’s not being signed are non football based.”

That’s actually a subtle call out to the National Football League, which isn’t the kind of thing a guy says when he’s just trying to look good.

Kaepernick is a talented quarterback, better than Manziel.

But this is pretty good evidence that Johnny Football, whatever his flaws and problems in the past, is a stand-up guy.