“I find it really hard to believe that Major League Baseball owns Rawlings and just coincidentally the balls become juiced.” 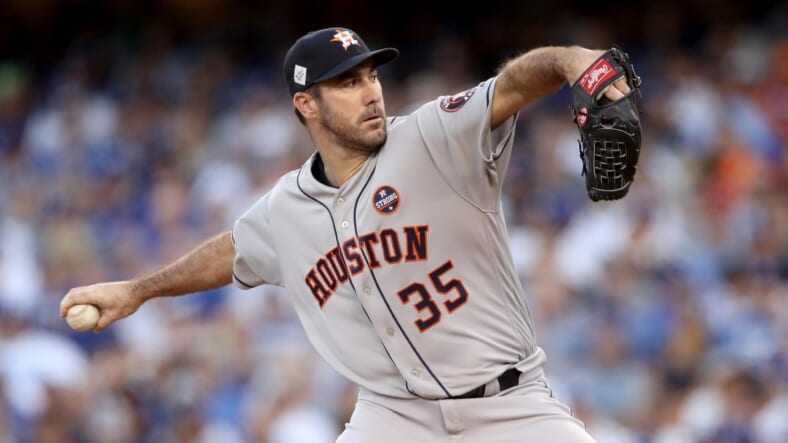 Justin Verlander believes there’s some foul play going on in the MLB.

The Houston Astros pitcher and eight-time All Star starkly accused the league of using juiced baseballs to bolster offense in a new interview with ESPN.

“It’s a fucking joke,” said Verlander, who will play his second All-Star Game on Tuesday. “Major League Baseball’s turning this game into a joke.”

He went on to describe something of a conspiracy involving baseball manufacturer Rawlings, which is owned by the MLB, and commissioner Rob Manfred.

“They own Rawlings, and you’ve got Manfred up here saying it might be the way they center the pill. They own the fucking company. If any other $40 billion company bought out a $400 million company and the product changed dramatically, it’s not a guess as to what happened.”

“We all know what happened. Manfred the first time he came in, what’d he say? He said we want more offense. All of a sudden he comes in, the balls are juiced? It’s not coincidence. We’re not idiots.”

ESPN has further details on the relationship between the league and Rawlings.

Conversations about a juiced ball have percolated since after the All-Star break in 2015, after which home runs spiked. They are up nearly 60% from the 2014 season, and MLB commissioner Rob Manfred commissioned a study to investigate whether the balls were contributing to the home run spike. It concluded the balls were performing differently but didn’t attribute a reason. In June 2018, one month after the study was released, MLB bought Rawlings, the supplier of the official major league ball.

Verlander has given up a MLB-high 26 home runs this season. But he may not just be steaming over that unfortunate stat—players are on track to hit a whopping 6,668 homers, which would smash the record 6,105 hit in 2017.

Here’s how he responded when asked if balls were being intentionally juiced.

“Yes. 100 percent. They’ve been using juiced balls in the Home Run Derby forever. They know how to do it. It’s not coincidence.”

“I find it really hard to believe that Major League Baseball owns Rawlings and just coincidentally the balls become juiced.”

Manfred categorically denied Verlander’s claims, telling ESPN that scientists who are “studying the baseball more regularly have told [him] that this year the baseball has a little less drag.”

“It doesn’t need to change very much in order to produce meaningful change in terms of the way the game is played on the field,” he added. “The baseball is a handmade product and there’s gonna be variation year to year.”

Washington Nationals pitcher Max Scherzer, who played with Verlander on the Detroit Tigers, essentially sided with Manfred in a separate interview with ESPN, noting that his team’s sluggers stand to benefit from different balls and saying he’s “not gonna cry about it.”

“I don’t feel anything different with the ball, but I think we can all see the ball is definitely traveling differently,” said Scherzer.

“And the commissioner has even come out and said so. The drag is just different. Yeah, the ball’s different…but you can’t cry about it. You gotta go out there and pitch. I’m not gonna cry about it. Our hitters get to hit with it.”

Regardless of which side of the issue you’re on, don’t feel too bad for Verlander. The dude does get to go home to Kate Upton, after all.