Khabib Nurmagomedov: Conor McGregor Doesn’t Deserve a Rematch With Me

“He begged me, ‘Please don’t kill me.’ Now we talking about a rematch?” 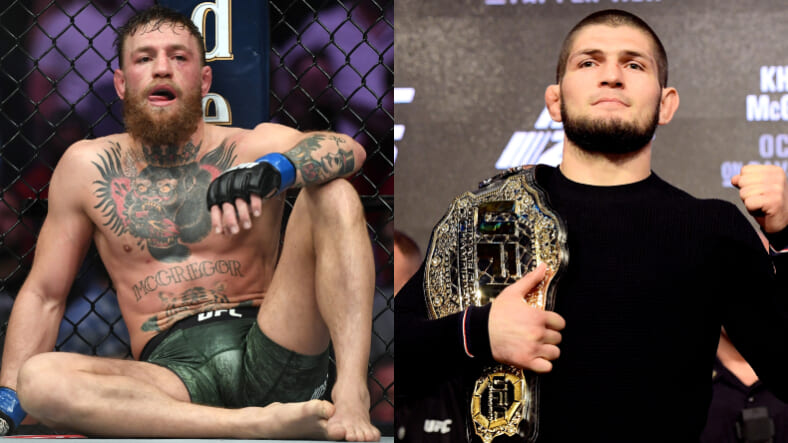 UFC lightweight champion Khabib Nurmagomedov, who dominated Conor McGregor in their bad blood superfight last year, has shot down the possibility of a rematch.

While promoting his upcoming UFC 242 fight against Dustin Poirier at a press conference in London, Nurmagomedov not only dismissed the very lucrative rematch that he would certainly be favored to win, but also claimed that McGregor begged Nurmagomedovnot to kill him during their first UFC clash.

“In the last three years, he has only one victory in amateur boxing,” Khabib said. “How does he deserve a rematch? He tapped.”

Nurmagomedov then said that McGregor “begged” the undefeated Russian not to kill him in the Octagon.

“He begged me, ‘Please don’t kill me.’ Now we talking about a rematch?”

Khabib continued, “Tony Ferguson’s on the line. People who have win streaks [are] on the line. Not the guy who don’t win nothing last three years.”

UFC commentator Joe Rogan has also gone on the record saying that he doesn’t think McGregor deserves a rematch.

“There’s all this talk about a Conor rematch, because financially that would be a fantastic fight” Rogan said recently.

“But if you look at what happened, that was a dominant victory. There was one round where Conor did pretty good, the third round.”

“Other than that, Khabib just sort of dominated him. I mean, he dropped him in the second, beat the fucking shit out of him in the fourth. The third was a round where Conor did pretty good, because most of it was standing up.”

Both Nurmagomedov and McGregor received suspensions for their wild post-UFC 229 brawl that erupted after the Russian jumped out of the Octagon to fight McGregor’s entourage.

But Nurmagomedov will make his return to the Octagon against Dustin Poirier in Abu Dhabi on September 7. Meanwhile, McGregor’s UFC future is currently unknown after he announced his retirement in March.

Having said that, absolutely no one would be surprised if UFC boss Dana White managed to convince both men to fight again for a mega-hyped, pay-per-view bonanza.